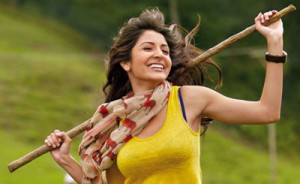 NEW DELHI : Basking in the glory of her latest blockbuster ‘PK’, actress Anushka Sharma is certainly the ‘girl of the moment’. The latest that has been reported about the leggy lass is that she might be seen performing her own stunts in her first home production venture ‘NH10’.
2015 will definitely belong to Anushka Sharma. After having given us the smash hit PK, the beauty is all set to be seen in her upcoming films Bombay Velvet, Dil Dhadakne Do and her home production venture NH10.  Where Anushka will be seen playing a glamourous jazz singer in Anurag Kashyap’s Bombay Velvet, the actress will take the opposite route for NH10. We hear that Ms Sharma is about to go de glam for the film!And by de glam we don’t just mean ‘no makeup.’
The PK fame will be seen in some rather gory visuals. The effect of the same will be brought in by a French artist who has said to have worked in several European films as well as theatre projects. Director of the film Navdeep Singh while talking to a leading tabloid said,” It’s a gritty, gory film but thanks to Romy, when you see Anushka lying in a pool of blood, her skin peeling off, you will never guess the amount of prosthetics involved. It’s a new-age thriller and the prosthetics helped to break stereotypes. Anushka is a star but in this film we did not want to glamourise her at all.”
Wow that’s some hard work eh? Anushka surely seems to be one of the most versatile actresses on the block. Where in NH10 the beauty will be seen in a rugged form, in Bombay Velvet she dons heavy gowns and has a starry appeal followed by Dil Dhadakne Do where she will essay the role of a dancer. And she also played a journalist in PK!
Anushka will surely give the Deepikas, Priyankas and Alias of B-town a run for their money this year!