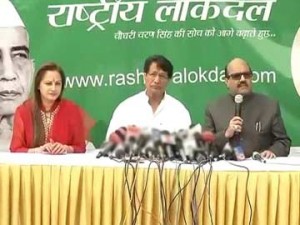 NEW DELHI : Former Samajwadi Party general secretary Amar Singh, who has remained in political hibernation in the last four years, took his first step towards rehabilitation by joining Union minister Ajit Singh’s Rashtriya Lok Dal, or the RLD, today.
Mr Singh’s close associate, actor-turned-politician Jaya Prada too joined the RLD, scotching all speculation about her plans to make a beeline to the Congress. The Jat-dominated RLD has pockets of influence in western Uttar Pradesh, and it remains to be seen whether she will be accommodated with a party ticket.
Mr Singh and Jaya Prada were expelled from the Samajwadi Party in February, 2010 for leading “a capitalist and communalist invasion.” Jaya Prada had won the 2009 Lok Sabha polls from Rampur, overcoming resistance from the Samajwadi Party’s Azam Khan, who is now a senior minister in the Akhilesh Yadav government in Uttar Pradesh.
Mr Singh, 58, floated his own outfit, Rashtriya Lok Manch, in 2011, and fielded candidates in 360 of the 403 seats in Uttar Pradesh in the 2012 assembly polls. His party, however, drew a blank, and, since then, the Thakur from Azamgarh had slipped into a low profile. He never commanded a mass following, and it remains to be seen whether his induction will bring in electoral dividends to the RLD.
Reports appearing in a section of the media suggested that Mr Singh could be on his way to the Congress, but he eventually decided to join the RLD. There are indications that he may be fielded from Fatehpur Sikri in the coming Lok Sabha polls.
The RLD, a constituent of the UPA, stitched up an alliance with the Congress last week, and was left 8 seats as part of a seat-sharing deal. These include Mathura, Baghpat, Hathras, Amroha, Kairana, Bijnore, Bulandshahr and Fatehpur Sikri.In the 2009 general election, the RLD had contested seven seats in alliance with the BJP, and emerged victorious in five.