NEW DELHI : Amid a perfect political storm over whether BJP prime ministerial candidate Narendra Modi has said he thinks of her “like a daughter”, Priyanka Gandhi today said, “I am Rajiv Gandhi’s daughter.”The Times of India reports today that remarks on Priyanka by Mr Modi, were edited out of an interview that aired on Sunday on national broadcaster Doordarshan. 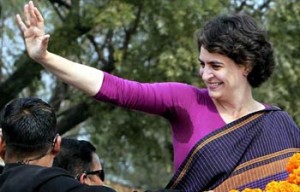 Finance Minister and senior Congress leader P Chidambaram said today that editing content “is the prerogative” of the channel; Mr Modi’s party has alleged censorship.Mr Modi’s interview was telecast on April 27, two days after it was recorded, triggering speculation online about whether it would be dropped or censored.
Priyanka’s mother, Sonia, is Congress president and her older brother, Rahul, is leading the party campaign for the national election. Their father, prime minister Rajiv Gandhi, was assassinated in 1991. Priyanka, 42, is not running for Parliament but has, in recent weeks, forged a strong attack on Mr Modi, 64.
Priyanka’s sustained and strong campaign against Mr Modi came after he has alleged at election rallies that her husband, Robert Vadra, scored sweetheart deals in states like Haryana, where the Congress is in power.
Amid swirling predictions of the BJP’s strongest-ever performance under Mr Modi and a Congress wipe-out, Priyanka has resolutely and publicly challenged his credentials, accusing him of double-speak on women’s safety and of promoting crony capitalism in Gujarat, where he is serving his fourth term as chief minister. Her daily strikes at him have been welcomed within her party as a much-needed resuscitation of an uninspired campaign. Questions about whether she is eclipsing her brother have tailgated her new aggressive role. Recently, Mr Modi said in an interview that it was “natural for a daughter and sister to defend her mother and brother”.