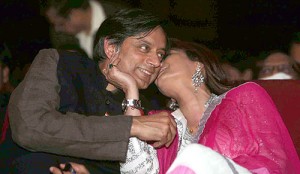 NEW DELHI : He was a smooth-talking politician from South India with an international reputation from his time at the United Nations. She was a beautiful Kashmiri from the north when they met in 2009 in middle age and began a relationship partly played out in the media, and social media, glare.
Now after public allegations that he was having an affair, the woman is dead, in what a doctor called an “unnatural, sudden death.”Her husband, Shashi Tharoor, briefly checked himself into a hospital with chest pains. And Twitter is alive with virtual handwringing over whether the medium allowed a dangerous level of overexposure.
The unraveling of the couple’s personal lives began last week, when the wife, Sunanda Pushkar, was quoted as saying she sent out a series of tweets that she said proved Tharoor was romantically involved with a Pakistani journalist. Days later, on Friday, he reported finding her dead in a hotel bed.
On Saturday, Sudhir Gupta, one of the doctors who performed an autopsy, told reporters that “there were certain injury marks on the body, but we can’t divulge details at this point.” He ruled out poisoning and said it would take several days to determine the cause of death.
The death of Pushkar, 52, stunned many in Delhi’s journalistic and political circles, many of whom had followed the twists in her life since she met Tharoor, a high-profile member of the governing Indian National Congress party.

Married twice before herself, she became his third wife in 2010 in the wake of a scandal that led to his resigning a top post in India’s Foreign Ministry. The scandal centered on accusations that he had used his official influence to help her get an ownership stake in a franchise in India’s cricket league. He denied any financial wrongdoing, and the two of them – both prolific users of social media – later turned to Twitter and the media to discuss their relationship.

He called her “priceless,” leading to some ridicule for his public display of affection. She then told a TV interviewer, “Shashi and I show our love with PDA.”
On Wednesday, Pushkar, who seemed to have gained access to her husband’s Twitter account, began posting messages that she said he had received from the Pakistani journalist. One said the sender was “in love with you, irrevocably, irreversibly.” The drama between Pushkar and Tharoor was covered heavily on India’s 24-hour news channels. In interviews, Pushkar sounded despondent and sometimes dazed.
She told The Indian Express, a popular newspaper, that her husband had been in a “rip roaring affair” since April, and that she would seek a divorce.
“That woman pursued and pursued him,” she was quoted as saying. “Men are stupid anyways.” She then added: “For all you know she is a Pakistani agent. Where’s love, where’s loyalty in this world?”
The journalist, Mehr Tarar, denied having an intimate relationship with Tharoor, and responded on her own Twitter account, “I am not an ISI agent,” referring to Pakistan’s main spy agency. “Or CIA. Or Mossad. Or even the dead KGB. May I go now?”
The next day, Pushkar and Tharoor issued a joint statement playing down the episode.
“We are happily married and intend to remain that way. Sunanda has been ill and hospitalized this week and is seeking to rest,” they said. The statement also vaguely suggested that the messages in question from their accounts had been “unauthorized.”
On Friday, he returned from a major gathering of the Congress party to a suite at a luxury hotel in Delhi, where he found his wife dead, fully clothed and lying on the bed, said Abinav Kumar, his personal secretary. He said there were no signs of foul play.
Tharoor, formerly a top U.N. official, was one of the first politicians in India to use Twitter intensively, and infuriated many Hindus in 2009 when he sent out a message describing traveling in coach on a flight as “cattle class out of solidarity with all our holy cows.” Hindus revere the cow, and the tweet almost cost him his political career.
On Friday night, the name Sunanda Pushkar was being discussed in the media and trending on Twitter as people posted messages conveying shock and sadness over her death, with many commenting on the role the social media had played in her last days.
Suhel Seth, a public relations specialist and a friend of the couple, said on TV that Twitter had caused the “decline of many” and that now it had led to the “demise of a very, very fine human being.”
Tarar, whom Pushkar had accused of pursuing her husband, wrote about the announcement of her death on Twitter: “I just woke up and read this. I’m absolutely shocked. This is too awful for words. So tragic I don’t know what to say. Rest in peace, Sunanda.”