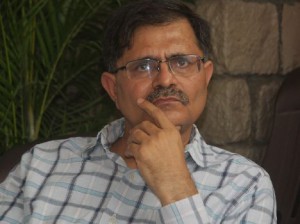 CHANDIGRAH: Haryana IAS officer Pradeep Kasni, who has reportedly been transferred 60 times in 30 years, has been shunted out again, days after he took on the Haryana government by red-flagging questionable appointments made by Chief Minister Bhupinder Singh Hooda.
Mr Kasni, the Secretary of the Administrative Reforms Department, has now been posted as the Administrator of the Command Area Development Agency, which is considered a relatively unimportant department in government circles. The government calls it “routine” transfer of six officers.
The 1997 batch IAS officer had last month refused to clear the appointment letters for five senior officers appointed by the Chief Minister in a hastily-organized ceremony. The officers were administered their oaths by the Chief Minister – a role usually reserved for the Governor – even though a new governor, Kaptan Singh Solanki, had taken charge hours before. Mr Hooda claimed he had the outgoing governor’s sanction.
Mr Kasni had also objected to the people chosen by the chief minister to serve in crucial posts in the Right to Information and Right to Service Commissions, saying they did not meet the criteria needed for their posts.He told NDTV today, “I had never questioned their wisdom…they were prone to be appointing illegible persons to statutory posts. Yet I do feel that the government didn’t take it kindly that I pointed out the procedural lapses and other infirmities in the process of selecting the commissioners.” Last week, the governor asked the Chief Minister for an explanation.
Sources say in his current post, Mr Kasni would have been in charge of framing the state government’s reply and that was the main reason for his transfer.
Signs of trouble for Mr Kasni were apparent when the state’s top bureaucrat, Chief Secretary SC Chaudhary, sent him a text message that appeared to be a threat.”Good night… please enjoy your new status of being a celebrity… But agar apni maa ka doodh piyah to mere saare msg press ko dikha dena (If you are a man, I dare you to show my messages to the press),” said the message. Mr Chaudhary later told reporters that his text message was misrepresented.