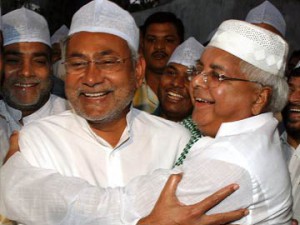 NEW DELHI: Early morning voting has been slow in Bihar, which is expected to serve the headline of today’s by-elections being held in four states. Lalu Prasad Yadav and Nitish Kumar buried differences of two decades to take on a common enemy, the BJP, in 10 Assembly seats.
In the first big political battle since the general elections three months ago, by-elections are also being held for three seats each in Karnataka and Madhya Pradesh and two in Punjab. The ruling BJP hopes to extend its gains from the Lok Sabha elections.
In Bihar the new alliance of Nitish’s Janata Dal United and Lalu’s Rashtriya Janata Dal will test the ground with today’s by-election ahead of state elections next year. They have come together after over 20 years of bitter political feuding to contest four seats each. The Congress, playing junior partner, is contesting two.
Nitish and Lalu shared stage several times during the campaign, famously hugging and sharing tea on stage in their first appearance together at Hajipur. The BJP, which bagged 32 of the state’s 40 seats in this year’s national elections, stepped up its campaign in the last few days and has dismissed the Nitish-Lalu alliance as “opportunistic” and one born out of “the fear of losing.”
The BJP is contesting nine seats and its ally Ramvilas Paswan’ Lok Janshakti Party (LJP) one. Two of the three seats up for grabs in Karnataka were held by BJP prodigals BS Yeddyurappa and B Sriramulu, who have since become members of Parliament. The third was held by the ruling Congress, which has a point to prove after being able to win only nine of 28 Lok Sabha seats in May this year. The BJP credits its haul of 17 in the general elections to a Modi wave and hopes that will continue.
In Madhya Pradesh, chief minister Shivraj Singh Chauhan of the BJP would not be losing much sleep over today’s by-elections to three assembly seats. His wins in state elections and the national elections, both held within the last one year have been mammoth-sized. The counting of votes will take place on August 25.