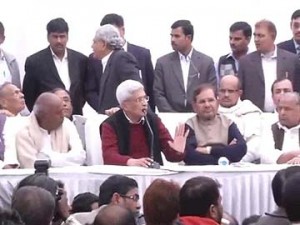 NEW DELHI : Positing themselves as the real alternative to the Congress and the BJP, leaders of 11 parties today decided to contest the coming elections together, but kept the vexed issue of prime ministership, which has been the bane of Third Front experiments in the past, in abeyance.Even before the alternative front could take proper shape, it suffered a setback of sorts, with Naveen Patnaik’s Biju Janata Dal, or the BJD, and the Asom Gana Parishad (AGP) deciding to stay away from the meeting convened today to draw a common charter of programmes.
“AGP president Prafulla Kumar Mahanta’s mother is critically ill, but he called us up and asked us to go ahead. Mr Patnaik informed us that he had some prior engagements, hence could not attend,” CPM general secretary Prakash Karat told reporters after the meeting. The Third Front leaders vowed to work for the defeat of the Congress and the BJP in the national elections due by May. A four-point work programme was also finalized. These include strengthening the democratic framework of the country, ending corruption and ensuring an accountable government; establishment of a firm secular order; drafting a people-oriented developmental path; and setting up a true federal system.
“We are an alternative to both the BJP and the Congress. We resolved to present an alternative before the country,” Mr Karat said.Third Front governments in the past have been rickety, and have been brought down because of the conflicting ambitions of its leaders. Wiser from the experience, leaders of the Front deliberately decided to keep the leadership issue on the backburner.”Madam Jayalalithaa told us that no leader should raise the issue of Prime Ministership now. These are issues which will be settled later, after the elections,” Mr Karat said.