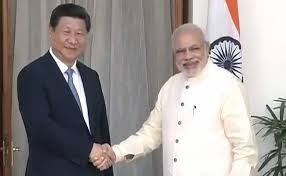 NEW DELHI: Prime Minister Narendra Modi today took up with visiting Chinese President Xi Jinping a series of incursions at the border and bluntly stressed on the need to resolve the dispute quickly and clarify the Line of Actual Control (LAC). “Respect for each other’s sensitivities and concerns and, peace and stability in our relations and along our borders are essential,” PM Modi said, speaking to reporters after a meeting with President Xi at Delhi’s Hyderabad House.
“The incidents that took place at the border, I expressed my concern. Our border CBMs (Confidence Building Measures) have helped but I have also suggested that for peace and stability, we need to clarify LAC,” he asserted. The two leaders met amid an unprecedented face-off at the border after 1,000 Chinese soldiers crossed into Indian territory in Ladakh’s Chumar in the worst such transgression in years.
The Chinese President sought to point at the “non-demarcation” of the border. “Due to non-demarcation of the border, certain incidents take place but both countries have mechanisms to handle such incidents,” President Xi said, adding, “Both sides are capable of effectively managing the border situation and settle the disputes at the earliest. We have the sincerity to work with India to ensure peace and tranquility at the border.
” India has posted 1,500 soldiers at Ladakh’s Chumur sector after armed Chinese troops crossed about five km into Indian territory yesterday. Sources said there is “no need to panic” and the situation is calm. The Chinese had been halted and pushed back, said officials. Chinese soldiers first entered almost a week ago at the area at the intersection of the international border and the LAC, the de facto border between the two countries.
They allegedly brought in in heavy construction equipment and a large labour force to set up a road up to the border. India and China have had many confrontations at the border since April last year, when some 50 Chinese soldiers crossed over and set up a remote camp at Daulat Beg Oldie in the Depsang Valley, 19 kilometres into Indian territory, leading to a 21-day diplomatic standoff.