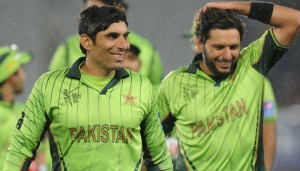 AUCKLAND: Pakistan`s trio of left-arm pacemen bowled their team to a thrilling 29-run win over South Africa on the Duckworth/Lewis method as they revived their bid for a World Cup quarter-final place in Auckland on Saturday.
Rahat Ali grabbed a career-best three for 40, while Mohammad Irfan (three for 52) and Wahab Riaz (three for 45) were also in the wickets as South Africa, chasing a revised target of 232 in 47 overs, were dismissed for 202 in 33.3 overs.
South Africa captain AB de Villiers hit a brilliant 58-ball 77 with five sixes and seven boundaries but failed to stop Pakistan from registering their third win in five matches — and their first victory over the Proteas in all World Cups.
Pakistan were all out in 46.4 overs after two rain interruptions which reduced the match to 47-over-a-side. Skipper Misbah-ul-Haq scored 56 while Sarfraz Ahmed made run-a-ball 49.
De Villiers, who completed 1000 World Cup runs, was dismissed by Sohail Khan in the 33rd over for wicketkeeper Sarfraz Ahmed`s sixth catch in the match — equalling the world record for most catches behind the stumps in a one-day international.
South Africa were off to a disastrous start as opener Quinton de Kock was dismissed in Irfan`s first over of the innings.Hashim Amla, who hit nine boundaries in his 38, steadied the innings during his 67-run second wicket stand with Faf du Plessis before Pakistan hit back.
Ali removed Du Plessis and David Miller (nought) while Riaz dismissed Amla and Rilee Rossouw (six) as South Africa lost four wickets for just 10 runs in the space of 39 balls.
Irfan returned for his second spell to dismiss JP Duminy for 12 as South Africa, who would have been in the quarter-finals had they won this match, were left reeling at 102 for six.
De Villiers took the fight to the Pakistani bowlers adding 36 with Dale Steyn (16) and another invaluable 33 for the eighth with Kyle Abbott who made 12.
He hit two sixes in one Shahid Afridi over to reach his fifty off just 45 balls before Pakistan staged a late comeback.It was Misbah who steadied Pakistan`s innings with a determined 86-ball knock — his fourth half-century in five World Cup matches.
The Pakistan captain also completed 5,000 one-day international runs when on seven in his 160th match. He was the 12th Pakistani to reach the landmark but the first from any country to do so without scoring an individual hundred.
Misbah hit four boundaries before he holed out at third man off fast bowler Steyn who finished with three for 30.Afridi made a 15-ball 22 with two sixes and a boundary as he went to 8,000 ODI runs.
Ahmed put on a confident 30-run opening stand with Ahmed Shehzad (18) — the best opening stand for Pakistan in this tournament — before Steyn held a smart diving catch to give South Africa the breakthrough.
Shehzad hit Abbott towards long-on where Steyn, on the run, held a low chance.Ahmed, who did not play in Pakistan`s first four pool matches, hit three sixes in one Duminy over before he ran himself out while taking a second run in a bid to reach his fifty.
He also hit five boundaries in his run-a-ball knock.
Younis Khan, dropped after poor run of scores in the first three matches, made an attractive 44-ball 37 with four boundaries before falling to soft dismissal off the part-time bowling of de Villiers.
But South Africa`s lack of a genuine fifth bowler proved costly, with de Villiers and Duminy conceding 77 runs between them in a combined nine overs.