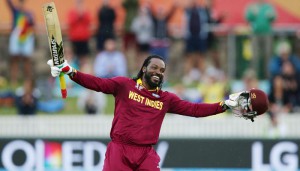 CANBERRA: Chris Gayle smashed the highest ever individual World Cup score of 215 and his first century in 20 months as the West Indies flattened Zimbabwe on a record-shattering day in Canberra on Tuesday.
The Caribbean entertainers amassed 372 for two after winning the toss and then bowled Zimbabwe out for 289 chasing a revised 363 to win the rain-reduced match by 73 runs at Manuka Oval.
Man-of-the-match Gayle, 35, clubbed a record-equalling 16 sixes including three in a row, to cash in after a huge let-off on the first ball he faced and was eventually out off the final ball of the innings.
Gayle also eclipsed his previous highest one-day international knock of 153 not out against Zimbabwe in 2003.
Records tumbled as Gayle, who also went past 9,000 ODI runs, bettered South African Gary Kirsten`s previous highest World Cup score of 188 not out against the UAE in Rawalpindi in 1996.
Only India`s Rohit Sharma with 264 and Virender Sehwag (219) have scored more runs than the explosive West Indian left-hander in an ODI innings.
Gayle`s 372-run partnership with Marlon Samuels (133 not out) was also an all-time ODI record.The 35-year-old Gayle`s double-century came off just 138 balls and this innings was his first three-figure score since he made 109 against Sri Lanka at his Sabina Park home ground Kingston in June 2013.
“It`s been a lot of pressure, the runs haven`t been coming and this is the first time ever in my career,” said Gayle during the mid-innings break.”So many people wanted me to score runs and the messages kept coming in on Twitter and in the end I am glad to have given them something to actually cheer about,” he added after his 22nd century in 226 ODIs.
Gayle turned around the West Indies innings with Samuels after the second-ball dismissal of fellow opener Dwayne Smith.Samuels inninins was comparatively more sedate compared to Gayle`s whirlwind knock, his 133 not out coming off 156 balls with 11 fours and three sixes.But it could have all been different had Gayle not survived a very contentious review in his favour off the first ball he faced.
Tinashe Panyangara had a tremendous opening over, bowling Smith second ball and then looking most unlucky not to get Gayle out leg before wicket with his fourth delivery after a review.
Replays showed the ball hitting Gayle`s pads and he was initially given not out by umpire Steve Davis, only for Zimbabwe to seek a referral.
The TV umpire ruled umpire`s call, adjudicating the ball was going over the stumps, but Gayle looked fortunate to still be at the crease.”It was scary the first ball, it was like `come on, you`re not serious, you can`t be out first ball,`” Gayle said.
“I needed a chance and I got a break and I made best use of it. “I was under pressure to score runs, and I kept getting messages from Twitter and on my cell phone from fans. I have never known so many people wanting Chris Gayle to do so well.”
Gayle`s record-shattering innings came just days after he was inadvertently caught up in an embarrassing Twitter gaffe committed by West Indies Cricket Board (WICB) president Dave Cameron who retweeted a post from a spectator calling for the batsman to be pensioned off.
Gayle`s knock was only the fifth double century in all ODIs and the first by a non-Indian, with Sharma having gone past 200 on two occasions.”I am very happy to get this first double hundred and ever since Rohit got two, I have been hounded to get one as well,” said Gayle.
Samuels also had a life on 27 when he was put down by Tendai Chatara at backward point off Sikandar Raza just before drinks and the West Indies were 73 for one.Gayle was caught by Raza off a no-ball by Panyangara on 121 in the 39th over as things continued to go his way.
But off the last ball of the innings, Gayle was out after he skied a catch to Zimbabwe skipper Elton Chigumbura. In total, he faced 147 balls with 10 fours and 16 sixes.
Zimbabwe never looked like getting near the huge West Indian target, reduced by a rain break to 363 off 48 overs, with Sean Williams top-scoring with 76 off 61 balls and Jason Holder and Jerome Taylor taking three wickets each and Gayle claiming two wickets.