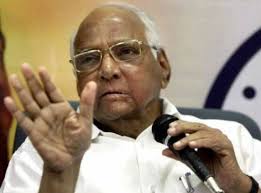 MUMBAI: The Nationalist Congress Party has said that it will not oppose the bill to amend the Telecom Regulatory Authority Act which seeks to remove a legal hurdle in appointment of former TRAI chairman Nripendra Misra as principal secretary to the Prime Minister.
“We will not oppose it in Parliament. There is no need to take an extreme step,” NCP chief Sharad Pawar said at a press conference today. “It is not as if a person has left government service and joined Reliance or another private sector. He has returned to the government sector,” he added.
The NCP president cited the example of TKA Nair, an IAS officer of Punjab cadre, who after retiring from service became principal secretary to Manmohan Singh when he was the Prime Minister.The statement assumes significance considering the fact that the NCP is a key ally of the Congress-led United Progressive Alliance.
The Narendra Modi government, after it took charge in May, had passed an ordinance to legitimise the appointment of Mr Misra. But the Congress raised objections to the government’s move to amend the TRAI Act, saying it was done in “unholy haste”.
A bill to replace the ordinance was tabled in the Lok Sabha on Friday amid loud opposition protests about its constitutional validity. In the Rajya Sabha, the Congress, which is the single largest party with 68 MPs, has said it will oppose the bill. Law Minister Ravi Shankar Prasad said the government was within its rights to bring any law in the telecom regulatory authority.
The government says the law needs to be changed as TRAI is the only authority which bars its chairpersons from taking up any official assignment.Mr Misra had already taken charge as Principal Secretary before Mr Modi was sworn in on May 26.

The Prime Minister reportedly hand-picked the 1967-batch IAS officer, who has held several important positions in the government. He was secretary in the ministries of telecom and commerce.