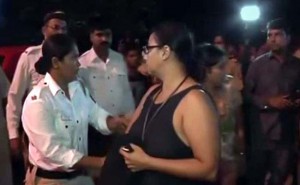 MUMBAI: Late on Monday night in Mumbai, a woman locked herself in her car during a drink driving check, forcing a group of policemen to take desperate measures.The woman was stopped in the upscale suburbs of Bandra by policemen who suspected she was drunk. When her test showed more alcohol than permitted, she allegedly rushed into her car and locked herself in.
For at least two hours, she sat in the car, playing loud music. The police claim she abused officers and threatened them.Finally, when all else failed, the police smashed a window to force open the car. Cigarette butts and disposable glasses were found in the car.After being pulled out by policewomen, the woman tried to escape. Footage showed her chasing media crew gathered at the spot and shouting abuses while being dragged into a car by the police. She was booked and fined before being allowed to go.
Last week, two people died when 35-year-old lawyer Janhavi Gadkar rammed a taxi with her Audi SUV in an allegedly drunken state. Ms Gadkar had been driving recklessly on the freeway, at a very high speed with music blaring before the crash.Senior police officers then announced that there would be stringent drink driving checks across the city.