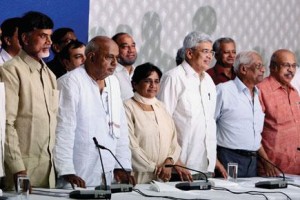 KOLKATA : With CPI(M)-CPI-led Left Front’s proposed Third Front getting a little cracked up in the beginning, Trinamool Congress leader and West Bengal Chief Minister Mamata Banerjee seems to have hard the footfalls of Left’s more profound decay in the state in coming elections.
While sources in Chief Minister’s Office said Tamilnadu Chief Minister J Jayalalithaa called her up this morning after she seemingly winding it up with Left in her state.
According to sources, Jayalalithaa, who also shares the ambition of Mamata Banerjee and wants to be backed as PM, was learnt to have congratulated her during her talks with Banerjee.
Left got another shocking setback after Samajwadi Party of Mulyam Singh Yadav yesterday decided to field four candidates from West Bengal!
“CPI(M) isn’t our boss, we do not see why we need to take their permission to field our men as candidates in West Bengal,’’ said SP leader Kiranmoi Nanda. Ironically, Nanada happened to be a minister in the last Left Front cabinet!
“So for us things turning out all advantages,’’ said a top TMC leader, adding, “Why? We did not break up their party, they want our support, we will provided they agree to Federal Front.’’Not only Jayalalithaa, even Nitish Kumar’s openly coming out as PM candidate, party insiders claim that “it came after he had had a dialogue with Mamata, so there more people who are aiming at the chair.’’
But incidentally, with more politicians trying to pose as PM, suddenly with Narendra Modi being favoured having dropped to 4 percent, have all rolled out to make the stakes as higher.Observers here believe, Mamata known for changing her stands more often, of late tried tactically to keep a balance in her bitter attacks both on the Congress and “Modi’s communal face in BJP, this would help her retaining Muslim vote-bank (now 30 percent in West Bengal) on one hand and the lower middle-class who of late have become victims of Congress-led UPA II’s failure to reign in hurtling food inflations and concept of reform-driven jobless growth on the other.’’
And Left-sponsored Third Front’s failure would only help her go ahead with more regional parties more aggressively, admitted a senior CPI leader who sensed setback to Third Front might just be the beginning.
“Though not many educated voters are happy with Bengali cinema-star studded TMC candidate list, it all adds to glamour but nothing more tangible beyond a point, but nationally Banerjee is put to an advantage,’’ admitted a senior educationist.“But, we do not think all is over with Jayalalithaa deciding to leave Left in a lurch, all have to go miles before the actual polling begins,’’ said a top CPI(M) leader.