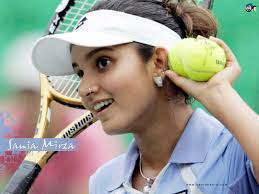 LONDON: Indian tennis star Sania Mirza and her Swiss team-mate Martina Hingis advanced to the second round of the Wimbledon Championships after defeating the duo of Saisai Zheng and Zarina Diyas in the opening round on Wednesday.
The top seeded India-Swiss pair defeated the Chinese-Kazakh team in straight sets 6-2, 6-2.In the men’s doubles, Leander Paes and Canada’s Daniel Nestor progressed to the second round, while Purav Raja and his French team-mate Fabrice Martin crashed out, the BBC reported.
In the women singles, world number seven Ana Ivanovic crashed out after losing 3-6, 4-6 to American Bethanie Mattek-Sands.In the men’s section, fifth seed Kei Nishikori of Japan pulled out from the tournament due to calf injury.
Meanwhile, top seeds Novak Djokovic and Serena Williams, Stanislas Wawrinka, Maria Sharapova and Milos Raonic advanced to the third round.