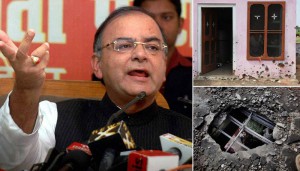 NEW DELHI : With the border tension between India and Pakistan undiminished, Defence Minister Arun Jaitley today warned that while “Pakistan has clearly been the aggressor, they must realize our deterrence will be credible. If Pakistan persists with this adventurism, our forces will make the cost of this adventurism unaffordable.”
This week has seen the worst violence in over a decade at the border in Kashmir. Eight civilians have died in India; more than 45 have been injured. Pakistan claims nine civilians have died on its side of the border. If Pakistan persists with this adventurism, our forces will make cost of this adventurism unaffordable for it Jaitley says.
“India is never an aggressor, it is a responsible state, but it has a paramount duty to protect its people,” said the Defence Minister today.His comments reinforce the tough stand taken by India, warning that no talks will be held with Pakistan on de-escalating tension unless the firing stops completely. But top government sources say they do not expect the situation to intensify; they anticipate a de-escalation soon.
That’s what Prime Minister Narendra Modi indicated yesterday. “Everything will be fine soon,” he told reports yesterday in his only remark on the crisis so far.India retaliated to gunfire and mortar shells on 60 border security posts overnight; the firing was still going on intermittently in some areas this morning. Almost 20,000 Kashmiris have fled their homes in the lowlands around the Jammu region to escape the fighting, taking refuge in schools and relief camps.
Dozens of Indian Army outposts and villages have been shelled by Pakistan this week and New Delhi says it has retaliated forcefully.Since the fighting began this week, there has only been one phone call between the two militaries. The usual way of de-escalating clashes is to call a meeting of senior officials at the border, but no such meeting has been held this time.
Meanwhile , Union Minister for Urban Development M Venkaiah Naidu says he is afraid whether there is a conspiracy hatched in Pakistan to divert people’s attention from development initiatives taken by the Indian government. The Indian government is replying to Pakistan in the language it understands: BJP leader Shahnawaz Hussain