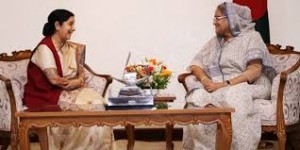 KOLKATA:Despite exchange of good wishes and air of friendship, Dhaka may not see much reason in new BJP-led NDA Government’s insistence on preventing people coming across the border.
Though it was not clear yet if Indian External Affairs Minister Sushma Swaraj had already raised the issue of infiltration or illegal migration of Bangladeshis, but Dhaka leaderships’ mindset did not change much on the issue since Mujibur Rahaman was assassinated and Dhaka underwent a series of political convulsions.
As for example, sometime in late 1990s, Bangladesh Prime Minister Begum Hasina who visited India then in Bengal, according to very senior reporter (only one) “both former Bengal chief minister Jyoti Basu called on her at a hotel she was staying and at the end of the meeting when both were coming out, reporter asked Basu if they any important talks, especially on the issue of illegal migration og Hindus and Muslims.
“Basu turned back to Hasina immediately and just broached the issue, an unfazed Hasina smilingly lashed back: “Ki kon Jyoti Babu, bhai bhai-er bari jaibana, erre apni anoprobesh kon (What you are saying Jyoti Babu? Will not brother to his brother’s home, it’s strange you call it infiltration?)’’ And for the first time ever Joyti Bau asked the reporter not to report about the talks (Basu never bothered what media is saying him or his party and never asked any reporter not to quote him!
“This happens to be the mindset of Dhaka rulers whether they are Awami League or BNP and they are not convinced about India’s arguments, and encouraged by West Bengal politicians regardless of their colours,’’ said a political commentator.