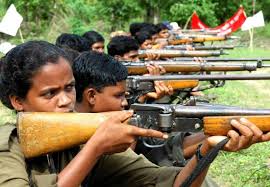 RANCHI: Calling churches and Christians to play an “active role” in eradicating Left wing extremism, senior RSS leader Indresh Kumar on Sunday wondered why Naxals have “never targeted” the minority community in Chhattisgarh.
“Development can be achieved (only) through peace and brotherhood and not through violence. I have raised a few questions keeping in view Chhattisgarh which has been suffering from the menace of Naxalism with a high degree.
Naxals have never targeted churches and priests just because they serve them or is there some other reason?” he asked, while interacting with reporters on the sidelines of a programme organised by Forum for Awareness of National Security (FANS) here, to discuss Left wing insurgency prevailing in south Chhattisgarh.
Stating that he was putting “a few questions” before the Christian community and others working in Bastar region, the RSS leader said arms and huge sums of foreign money have been supplied to Naxals

“…People from media, society and government provide information regarding illegal activities being carried out in the region. Have churches ever tipped off media or government about such kind of violent and illegal activities in the region?” he asked.
However, Indresh clarified that he was not questioning integrity of churches.
“My intention is not to criticise churches. I know they are committed to India and their people believe in serving the nation, but I want their active role in eradicating Naxalism, therefore I have put forth these issues.
They should decide whether Naxal movement has brought life or death to the region, educated people or snatched away literacy from them, ensured better health or ruined health facilities, triggered development or stalled growth,” he said.
Indresh also appealed to the ultras to quit the path of violence and contribute in building a new Chhattisgarh.”The movement of fear should get transformed into a movement for development. It should become a movement for humanity rather than a movement of violence,” Indresh added.