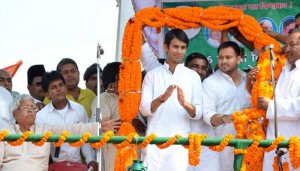 NEW DELHI: : RJD chief Lalu Prasad Yadav has all the reasons to feel elated – firstly, his RJD has become the single largest party in Bihar Assembly with 80 seats, and secondly, both his sons Tej Pratap Yadav and Tejashwi Yadav have risen to great heights in politics.
However, when it came to allotting the plum portfolio of deputy CM, Lalu chose 26-year-old Tejashwi over his elder son Tej Pratap. Here’s why the former Bihar CM may have made such a choice.

1)Lalu trusts his younger son more than the elder one. 2) Tejashwi has been a cricketer and is quite popular among the masses than Tej Pratap. 3) Tejashwi is a better orator plus has a controlled diction than Tej Pratap .4) It is said that Tejashwi has a better understanding of Bihar politics and has inherited the exact political style of his father
.5) Tejashwi is quite tech-savy and has a good fan following on social media. 6) He has launched many online and offline campaigns for his party. 7) It was Tejashwi who came to the forefront to counter the attacks of PM Narendra Modi during the latter’s rallies in Bihar.

Yesterday, while taking oath during the swearing-in ceremony, Tej Pratap Yadav misread some words for which he was publicly corrected by Bihar Governor Ram Nath Kovind.