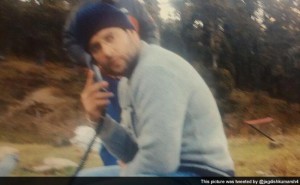 NEW DELHI: Photos of Rahul Gandhi, purportedly at a hill resort in India, surfaced on social media this morning as speculation over the Congress leader’s absence during a crucial Parliament session took a curious turn.
Congress leader Jagdish Sharma tweeted three photos with the comment in Hindi, “Rahul Gandhi always goes to the hills of Uttarakhand, not Bangkok.”In one of the images, Mr Gandhi is seen in a cap and sweater, speaking on the phone.
The images set off the buzz that the 44-year-old Congress vice president is in Uttarakhand, heading to Gangotri, a holy town at the base of the Himalayas.His office insists he is abroad and these photographs were taken earlier.
Congress leader Rajiv Shukla said, “If he wants a break and introspect, let him. You get pics from anywhere and put it on social media, it is ridiculous.”
On Tuesday, senior Congress leader Digvijaya Singh disputed criticism on Rahul Gandhi “holidaying abroad” and said, “He has not left the country. There is no proof that he has left the country.”
When the Congress announced his “leave of absence” on Monday, some reports had said that he had taken a flight to Bangkok last week and then travelled to Greece.
The BJP seized on it to deride the Congress leader on his “lack of interest” in a crucial session. The hashtags #WhereIsRahul and #RahulOnLeave flooded social media.Perhaps to stem the tide of criticism and twitter trends, Congress spokesperson Randeep Singh Surjewala yesterday said Mr Gandhi would be back by March 10, but did not elaborate on where he is.
Congress president Sonia Gandhi has refused to comment on reports that her son left the country in anger at not being allowed to restructure the party they run together.
Mr Gandhi has led the Congress to a series of electoral defeats since it was handed its worst drubbing in a national election last year. He wants time to think, party officials said on Monday, and to assess his own role as well as how best to reconfigure the 130-year-old party.