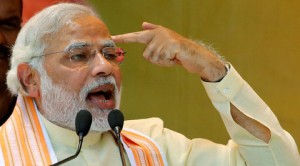 BARAMATI: Prime Minister Narendra Modi today reiterated his government’s tough stand on the confrontation with Pakistan at the Kashmir border. “Today, when bullets are being fired on the border, it is the enemy that is screaming,” the PM said, adding “the enemy has realised that times have changed and their old habits will not be tolerated.”
Addressing the criticism of political opponents who have charged him with not speaking directly about this week’s clashes – the worst in a decade – the PM said, “When there is a challenge at the border, it is soldiers who answer with fingers on the trigger; it is not for politicians to respond.”
His remarks, made at an election rally in Maharashtra, were a rebuke to the opposition, which has accused him of prioritising campaigning for the state elections in Maharashtra and Haryana over dealing with the border crisis. Eight civilians have been killed in India as Pakistan targeted dozens of army outposts and villages; more than 40 have been injured. Pakistan says it has lost 10 civilians.
Yesterday, in his first comments on the heavy fighting that began four days ago, the PM said “Everything will be fine soon” to reporters. But overnight, Indian forces retaliated to gunfire and mortar bombs on about 50 border security posts overnight, said senior officials. There was intermittent fire on Thursday.
“If Pakistan persists with this adventurism, our forces will make cost of this adventurism unaffordable for it,” Defence Minister Arun Jaitley said today. Indian officials say Pakistan’s aggression is based on the need to shift attention from its politically volatile landscape – Prime Minister Nawaz Sharif has confronted huge opposition protests. India also believes that Pakistan wants to use the attacks to help militants infiltrate Kashmir.
India cancelled talks with Pakistan in August after Islamabad insisted on consulting Kashmiri separatists ahead of the dialogue. Though the Prime Ministers of both countries addressed the UN General Assembly last month, they did not hold a meeting.