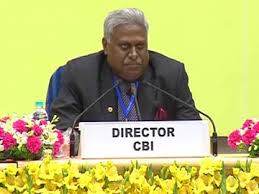 NEW DELHI: Yesterday Central Bureau of Investigation (CBI) Director Mr Ranjit Sinha while delivering the keynote address at the two-day Workshop on the subject “Tackling Match Fixing & Corruption in Football”, Mr  Ranjit Sinha has said that CBI will co-ordinate with other law enforcement agencies of the world and also liaise with sports federations and State police forces to build capabilities to tackle match-fixing and other corrupt practices in sports.
He also said that CBI will closely liaise & coordinate with Department of Sports, Ministry of Youth Affairs and Sports to help frame policies that would build deterrence in the system. He said that Department of Sports is in the process to finalise a bill to criminalise sport frauds which will help to provide much needed teeth to various agencies to take stringent action and will stand legal scrutiny.
Once the capabilities of CBI are built up, he stated, the agency would act as resource base and help other agencies in training and education regarding the menace of corruption in sports.
Highlighting the instances of match fixing, the director said that the corruption in sports are financed and managed to a very large extent by the betting industry, both legal and illegal, with close links with worldwide crime syndicates.
He admitted that there is a growing menace of match-fixing and allegations of corruption in sports, but hope that the agency will soon have a Sports Frauds Investigation Unit under its Special Crime Branch.
The workshop was a part of the “FIFA-INTERPOL Initiative” which was established to develop and implement a global training, education and prevention programmed with a focus on illegal betting and match fixing.  CBI and All India Football Federation (AIFF) have also associated itself with this Initiative to help realize its goals.
The Officials of Interpol, Senior Office bearers of FIFA, All India Football Federation & State Football Associations; Representations from major Football Clubs and Delegates from the Law Enforcement Agencies participated.
In 2000, the Delhi police intercepted a conversation between a blacklisted bookie and the South African cricket captain Hansie Cronje in which they learnt that Cronje accepted money to throw matches. The South African government refused to allow any of its players to face the Indian investigation unit.
A court of inquiry was set up and Cronje admitted to throwing matches. He was immediately banned from all cricket. He also named Saleem Malik (Pakistan), Mohammed Azharuddin and Ajay Jadeja (India) Jadeja was banned for 4 years. They too were banned from all cricket. As a kingpin, Cronje exposed the dark side of betting; however with his untimely death in 2002 most of his sources also have escaped law enforcement agencies. Two South African cricketers, Herschelle Gibbas and Nicky Boje, were also listed as wanted by the Delhi police for their role in the match fixing saga.
But the fountainhead of the betting syndicates is Dawood Ibrahim’s D Company. “Many think that the bookies fix matches. That’s not true as punters in Dubai are the ones who call the shots,” says a top Mumbai bookie. For any India-Pakistan clash, especially in Sharjah (the hub of match-fixing, say bookies), Dawood-controlled betting syndicates step in and Mumbai bookies, as an unwritten rule, lay off. And Dawood’s influence extends to players as well.
Ironically, the match-fixing case is yet to see the light of the days and gathering dust in the offices of various investigating bagencies.