AHMEDABAD: Architect of his side’s 32-run win over Rajasthan Royals, Sunrisers Hyderabad seamer Bhuvaneshwar Kumar described their bowling unit as one of the best in IPL and said the crucial victory will boost the team’s morale and help them turn the tables in remaining matches.The Sunrisers won two out of five matches in UAE and started their campaign in India with a loss against Royal Challengers Bangalore but Kumar’s four-wicket haul last night helped them to bring their campaign back on track.
Kumar said the win could not have come at a better time and it will keep them in “good frame of mind” for rest of the tournament. 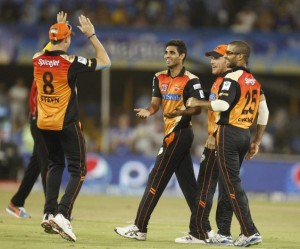 “The most satisfying thing about this performance is that it came at a time when we needed it the most. We were a bit low on confidence and this win will definitely boost us for rest of the tournament,” said Kumar after Hyderabad defended a modest total of 134-9 by dismissing Rajasthan for 102.“There are still a lot of matches to go and you never know the Sunrisers could well turn the tables,” he added.Kumar said despite a low score on board they were confident of defending the total.
“We have one of the best bowling line-ups in the IPL and we knew the wicket was not easy to bat on. It was a slow wicket and a turning one and we were confident that we could defend the low score,” he said.“We showed what we are known for and this will keep us in a good frame of mind for the matches to come. This performance and win will not only boost my confidence, but also the team’s morale in the tournament,” he added.
Kumar said it was a complete bowling performance by his side last night and also lauded the fielders for their brilliant show.“Dale Steyn and I got the team off to a good start, whereas Karn Sharma and Amit Mishra kept it tight in the middle overs, which were very crucial. Towards the death, Dale, Irfan Pathan and myself again got wickets when needed to round off a complete bowling performance by the side,” Kumar was quoted as saying in the IPL official website.“Our fielding was brilliant too. The timing of David Warner’s run—out to get rid of Stuart Binny was perfect.
Similarly, Irfan Pathan kept his cool to take a stunning catch to dismiss Steven Smith, which helped in turning the game in our favour. You need moments like these while defending small totals,” he added.Talking about his own bowling, Kumar said swing is his strength and he is happy that he has been able to take wickets and also keep a check on the run flow.“Swing is my strength and I am glad that the ball is swinging the way I want. T20 a format where wickets are important and I always look to get batsmen out,” he said.
“I have been economical and have gone wicketless in the past. Now, I am happy that I am economical and picking wickets at the same time.”The 24-year-old said he is enjoying sharing the pace responsibility along with ace pacer Dale Steyn and it has helped him to bowl better at the death.“I am enjoying bowling with one of the best fast bowlers in the world. He is the one who always talks and shares experiences regarding the different situations in a match,” he said.“Bowling at the death has been great as of now. I have been taking wickets up front and at the end as well. I am enjoying my bowling. I am glad I have been taking wickets and have been economical at the same time.”
The Uttar Pradesh pacer feels patience is the most important thing for a bowler to bowl in different situations.“I think patience is the most important thing while bowling in any format of the game, be it Tests, ODIs or T20s.It is the key while bowling in different situations.“And as a bowler, there will be days when you go for runs and don’t get any wickets. But one needs to realise that patience pays off, and with time, it will get you results. I feel a bowler should learn to be patient come what may.”