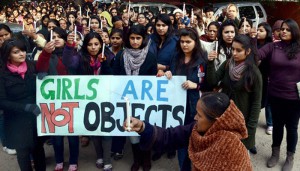 NEW DELHI : On the second death anniversary of the horrific December 16 ‘Nirbhaya’ gang-rape, Delhi Police Commissioner BS Bassi on Tuesday said that several changes have been made in law to prevent crime against women since the incident but there is a need for society to change for it to be effective as well.
“We want zero instance of crime against women in Delhi. Several changes in law have been made to prevent crime against women, but society also needs to change for it to be effectively implemented,” Bassi said while speaking to reporters.Bassi further said that around 1,900 cases of sexual assault have been reported in 2014.
He said that attempts have made to overhaul the system so that more women are able to come forward and report their grievances.Bassi further said that women help desks have been set up with women investigating officers in all the police stations. “Chargesheet will be filed in 20 days,” he said.
Speaking on the shortage of women police officers, he said, “Despite the long process of their recruitment, around 1200 women constables have been recruited,” he said.He also said that more measures to ensure safety of women have been taken, including patrolling in vulnerable areas and setting up of self defence camps which have given training to 14,000 women.
“There should be compulsory self defence training for girls should be introduced in schools from seven years of age,” he added.Talking about the delay in forensic reports, he said that sometimes the samples are sent to different places for investigation.