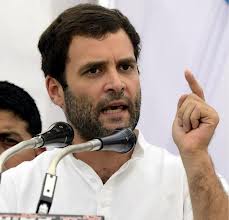 NEW DELHI: Congress vice president Rahul Gandhi Monday unveiled his vision of India as a global manufacturing hub at par with China. Gandhi said: “I want to put India on the manufacturing map, I want to make this the centre of manufacturing in the world. I want to make this place at least as much as a manufacturing power as China.”He outlined three things. “One is we have to transform ourselves, we have bring in youngsters, we have to give them space.
Two is we have to look at manufacturing, we have already set up the corridors in the North, South, East and West, how we can take the energy of the Indian people and build a manufacturing superhouse … That is what I think the real issues are.” He said the real question was to provide employment to the millions in the country.
“How do we bring jobs to millions of people? For example, every single person who comes to me from abroad — Japan, France, Germany, the US — and tells me: ‘Listen, we need an alternative to Chinese manufacture. We’re very happy with what the Chinese give us, but we need another port’.”
“There’s global energy saying we want to move manufacturing to India. The Congress party, the UPA (United Progressive Alliance) government have built the corridors, we’ve built the North-South, East-West corridor. We built three times the roads the NDA (National Democratic Alliance) built.”