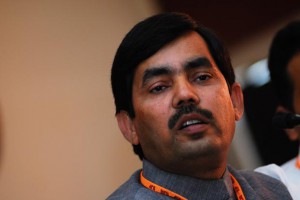 NEW DELHI: The Bharatiya Janata Party (BJP) on Monday slammed the Shiv Sena for demanding the withdrawal of voting rights from the Muslim community, adding that the participation in an electoral process is a constitutional right in India, irrespective of the faith practiced by the person.
“The Constitution of India has granted voting rights to people of all faiths, whether Hindu, Muslim, Sikh or Christian. The BJP believes in ‘sabka saath, sabka vikas’. No one can deprive anyone from casting votes. The Muslims in India consider the country their motherland,” BJP spokesperson Shahnawaz Hussain said.
Meanwhile, senior Congress leader Mani Shankar Aiyar accused the Shiv Sena of trying to divide the nation. “India has second largest population of Muslims in the world and in couple of decades we will have highest number of Muslims in the world. We should be proud of it. Shiv Sena is trying to divide the nation, they want to break it into pieces,” Aiyar said.
According to reports, Raut, in an article published in the Shiv Sena mouthpiece Saamna, wrote that the voting rights of Muslims should be withdrawn in order to put an end to vote bank politics. Raut also described All India Majlis-e-Ittehadul Muslimeen (AIMIM) leaders Asaduddin and Akbaruddin Owaisi as a ‘threat to the nation’.