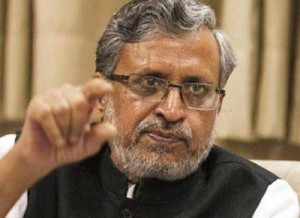 PATNA: After BJP chief Amit Shah’s controversial “crackers in Pakistan” comment, the party’s senior Bihar leader Sushil Modi has said voters must strengthen Prime Minister Narendra Modi as “China and Pakistan are afraid of him”.
“I would appeal to the people of Bihar that they should not let Narendra Modi be weak, China and Pakistan are afraid of him,” said Sushil Modi on Friday morning, also tweeting, “If BJP wins in Bihar there will be Diwali in India & if UPA wins there will be celebration in Pak.”
That built upon his party chief’s comment at an election rally in Raxaul on Thursday evening. “If by any chance the BJP loses this election…crackers will be burst in celebration in Pakistan,” Mr Shah had said, drawing criticism from the Nitish Kumar-led “Grand Alliance”, which has accused the Bharatiya Janata Party of attempting to polarise voters as the election enters the crucial last lap.
“He has insulted all the people of Bihar, Hindus, Muslims, Dalits, Mahadalits. He has called all of them Pakistanis,” said Lalu Yadav, chief of the Rashtriya Janata Dal, which has partnered with Nitish Kumar’s Janata Dal United and the Congress to take on the BJP in Bihar, where assembly elections are being held in five phases.

“The BJP had started campaigning with the talk about development. But as it started trailing it has decided to totally communalise the campaign,” alleged KC Tyagi of the JD(U).  They said they will complain against Mr Shah to the Election Commission today.

Hours before both PM Modi and Nitish Kumar address multiple rallies in the state today, Sushil Modi also attacked the Bihar chief minister saying, “This is a government which does not take action against terrorists for their vote banks. They find it safe to stay here; no investigation will take place till the time there is Lalu and Nitish.”
And he tweeted, “Nitish kumar refused to take Yasin Bhatkal on remand & even ordered ADG Rajesh Chandra to return from Muz who was to interrogate Bhatkal,” a reference to the arrest of Bhatkal, a founder of terror group Indian Mujahideen, in Bihar two years ago.