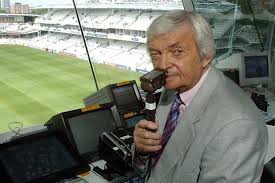 SYDNEY: Former Australia cricket captain and television commentator Richie Benaud has died at the age of 84, his former employer Channel Nine and Cricket Australia said Friday.Benaud, considered one of the most influential cricket identities of the past century, had been fighting skin cancer and died overnight in a Sydney hospice.
A veteran of 63 test matches, Benaud played a pivotal role in the formation of World Series Cricket in the 1970s and was one of the world’s most recognised commentators, anchoring the Nine Network’s cricket coverage for decades and calling the game in many countries around the world.
In 2013, Benaud was involved in a car crash outside his Coogee home in eastern Sydney that left him with two fractured vertebrae and ended his time in the commentary box.Nine reported that Benaud’s wife, Daphne, and other family members were by his side when he died.
“Richie Benaud’s passing has robbed us not only of a national treasure but a lovely man,” Nine Network chief executive David Gyngell said in a statement. “Richie earned the profound and lasting respect of everyone across the world of cricket and beyond. First as an outstanding player and captain, then as an incomparable commentator and through it all, as a wonderful human being.”
Australian test captain Michael Clarke said Benaud was a gentleman who played cricket in the right spirit.
“He was a great player and a great captain; a wonderful leader of men and he continued that off the field,” Clarke said. “He loved winning. He helped the Australian team have the attitude where they wanted to win. He played the game the right way.”
Benaud, born in Penrith outside Sydney in 1930, had a memorable test career as a wily leg-spin bowler and middle—order batsman which began in 1952 and ended in 1964.
After retiring, Benaud became a commentary icon initially with the BBC in England and later in Australia. His measured and laconic commentary style was fodder for imitators and cricket fans across the world.
“When I was a kid we never ever wore a cap … because (teammate) Keith Miller never wore a cap,” Benaud said at the time. “If I knew, when I was at school and playing in my early cricket days, the problems that would have come if I didn’t do something about protection of the head and using sunscreens and all sorts of things like that, I’d have played it differently.
“It’s one of those things in life- you live and learn as you go along.”Benaud did, however, manage to voice a touching tribute to Australian cricketer Phillip Hughes, who died during a match last November, which was screened before Australia’s test series against India last December.
Australian Prime Minister Tony Abbott said Benaud will be “very, very much missed.”“There would hardly be an Australian over the last 40 years who hasn’t listened to Richie Benaud,” Abbott said.
Cricket Australia chairman Wally Edwards said “our country has lost a national treasure.”
“After Don Bradman, there has been no Australian player more famous or more influential than Richie Benaud,” Edwards said in a statement. “Richie stood at the top of the game throughout his rich life, first as a record-breaking leg-spinner and captain, and then as cricket’s most famous broadcaster who became the iconic voice of our summer.”
“His crisp style, dry humour, understated delivery, and array of jackets made him one of the most loved personalities on television as he brought cricket to the lives of millions. Away from the camera he was a leader, mentor and positive influencer of an extraordinary number of cricketers.”
Benaud was working as a professional journalist when he was appointed captain of Australia for the first time in the 1958-59 series against England. He took 31 wickets at an average of 18 in the 4-0 series victory and held the job until his final series in 1963-64.
A colorful performer, he bowled with the top buttons of his shirt undone, and was a pioneer of the exuberant celebration, rushing up to his teammates after taking a wicket.
On the captaincy, he said- “Captaincy is 90 percent luck and 10 percent skill. But don’t try it without that 10 percent.”Later generations knew Benaud best as a commentator and presenter. His witty observations he once described Glenn McGrath as being dismissed “just 98 runs short of a century” and elongated vowel pronunciations were much impersonated.
“The only thing that annoys me about that is if I suddenly find someone on commercial radio or something like that, mimicking my voice or actions and trying to promote a product and pretending it’s me doing it.” Benaud said.
Benaud was made an Officer of the Order of the British Empire (OBE) in 1961 for services to cricket and was inducted into the Sport Australia Hall of Fame in 1985. In 2007, he was inducted into the Australian Cricket Hall of Fame and two years later was inducted into the ICC Cricket Hall of Fame.
New South Wales state Premier Mike Baird ordered flags to be flown at half-mast and offered a state funeral.