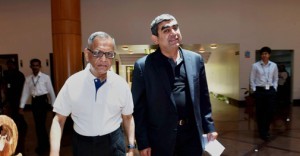 NEW DELHI : Vishal Sikka scored two firsts when Infosys named him its next chief operating officer and managing director. Sikka is the first person outside the group of founders appointed to the position in the company’s three decade-old history. He’ll also be the first to operate out of California and will spend a “significant amount of time” at its headquarters in Bangalore.
The company undertook a major management shake-up, bringing in Sikka and announcing that mentor N R Narayana Murthy and his son Rohan will step down four years ahead of their tenure.Sikka, 47, who was previously executive board member of German IT firm SAP, will replace S D Shibulal, one of the seven engineers who founded Infosys in 1981, from August 1.
Asked where he will be based, Sikka told reporters: “I live in California and I plan to continue living there. My family is in California… I’m looking forward to spend significant amount of time here in Bangalore.”Sikka previously worked at German enterprise solutions provider SAP, which he joined in 2002. Five years later, he was named the first chief technology officer of the company and was responsible for all SAP products and innovation.
Asked about Sikka’s appointment, Chairman of the Nominations & Governance Committee K V Kamath said: “At this point in time, what is happening all over the world is transformation. We basically had a bias for the transformational leader.
“It is probably not right to say that Vishal Sikka is this or that. He is actually several personalities in one. He is a very strong thinker, strong CTO, strong developer of product and software, and he has executed on this.”…when we started to talk to various candidates, when we looked at Vishal and then looked at what we wanted…we said he is not only a transformational leader, but he has actually all the qualities and qualifications and I think that clearly made Vishal Sikka stand out,” Kamath said.
Deutsche Bank India Research analyst Aniruddha Bhosale said with his stature and experience with products and innovation at SAP, Sikka will command the respect of Infosys’ leadership team and employees.”However, with his products background, we are concerned about Sikka’s ability to run a services company. This could also have implications on his view of costs and hence margins,” he added.