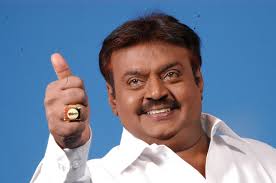 CHENNAI: Displaying a sense of urgency in firming up ties with the DMDK for the ensuing Assembly polls, senior BJP leaders led by its national secretary P. Muralidhar Rao and Union Minister Pon Radhakrishnan on Wednesday met the DMDK founder Vijayakant here a second time in a week.
However, the actor-turned-politician did not give away anything and kept the BJP guessing about his move given that he is being simultaneously wooed by the DMK, People’s Welfare Front and the national party.
The meeting at the DMDK’s headquarters in Koyambedu lasted an hour where “alliance and politics” figured in the discussion. When asked if the alliance has been firmed up, Mr. Radhakrishnan failed to give a definite answer to reporters at the Chennai airport.

However, he said his party wanted to wrap the alliance deliberations by January 20, 2016 and move on. To achieve this, the leaders would meet other potential allies also.
Sources in the BJP said Mr. Vijayakant told the two leaders about the party’s general council meeting scheduled for January 9 and that he would consult his partymen on the issue of alliance. Further, he stressed again that both the People’s Welfare Alliance and the DMK have extended an invite to him. In effect, Mr. Vijayakant maintained status quo.
PMK stand
Meanwhile, BJP sources added that the PMK had categorically stated that under no situation it would compromise on the chief ministerial candidature of Anbumani Ramadoss. Thus, the party may now be forced to choose between the DMDK and the PMK.

Mr. Vijayakant too had indicated that in case he agrees to be part of the NDA, the DMDK would be the official leader of the alliance. However, he did not explicitly mention the aspect of chief ministerial candidate.