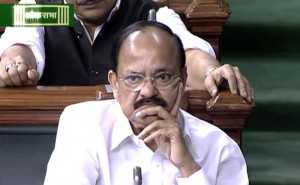 NEW DELHI: Known for his one-liners and quick wit, Parliamentary Affairs Minister Venkaiah Naidu over-reached with a series of jibes yesterday that united the opposition and forced him to apologize today.
Speaking in the Lok Sabha yesterday, Mr Naidu said, “Self-introspect if you can do it here and if you can’t, then go somewhere far and do it.” His target was Rahul Gandhi, who is on what his party has described as “a leave of absence” for two weeks, to contemplate the Congress’s future after a series of thunderous electoral washouts. He then aimed some quips at the regional TRS, which governs Telangana, and the CPI, which he derided as “consumer price index”. Mr Naidu’s sniper act hurt many egos and leaders of nine parties trooped down to complain to Speaker Sumitra Mahajan.
Minister Naidu realized last night that he’d gone too far. He called Congress leaders Jyotiraditya Scindia and Mallikarjun Kharge to express his contrition but that strategy didn’t work.
This mornjng, while the Rail Budget papers were being hauled into Parliament, lawmakers from the nine aggrieved parties gathered at the Congress office in Parliament. Congress President Sonia Gandhi took charge. The parties were unanimous about their strategy – let’s agitate.
When the Lok Sabha convened, Mr Naidu said he “didn’t mean to cause hurt.” The desired effect was not forthcoming and the parties shouted their dissent.
Prime Minister Narendra Modi then met with Finance Minister Arun Jaitley and Mr Naidu and made his stand clear – the minister was told to make nice.
It took another apology from Mr Naidu to dissipate the controversy. Those who protested, however, said there is more to come – the truce was organized so that the Railway Budget could be presented to lawmakers, they claimed.