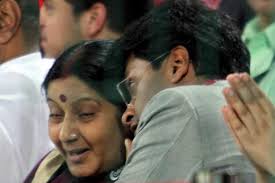 NEW DELHI: Sushma Swaraj today reacted angrily to a tweet suggesting she took favours to get her daughter a seat in a medical college through the northeast quota. “My daughter is a barrister and Oxford graduate. What you say in absolutely false,” she replied to the tweet. The Twitter handle ‘Soch @pakoed’ had insinuated that “Sushma is no stranger to taking and giving favours! Her daughter studied through NorthEast quota in medical college.”
The Rajasthan State Congress today passed a proposal asking for CM Vasundhara Raje’s resignation. The proposal was taken up at its executive meeting in Udaipur.
Youth Congress workers hold protest against Sushma Swaraj in Kolkata.
Former finance minister P Chidambaram today said that letters written to British authorities on Lalit Modi case during UPA rule should be released as they will answer the former IPL commissioner’s accusations against him and Congress. “The complete answer to Mr Lalit Modi’s accusations against UPA can be found in the letters to the UK Chancellor. Release them,” Chidambaram, a senior Congress leader, tweeted.
It is clear that this government brought ‘achche din’ only for legal offenders and people who stock black money, says AAP leader Ashish Khetan.
Congress’ Shobha Oza says party leader Rajeev Shukla has clarified that he hasn’t been in touch with Lalit Modi for the last three years. The clarification comes after Modi claimed that among several other leaders, Shukla too had helped him secure travel documents.
Sushma Swaraj is, meanwhile, attending a Union Cabinet meeting. The current row may figure in the meeting agenda, say sources.
News channels are also reporting that Vasundhara Raje has told top BJP leaders that she never testified for Lalit Modi.
Meanwhile, as per news channels, sources in the External Affairs Ministry have denied that Sushma Swaraj had a private meeting with Lalit Modi in London late last year. Earlier, media reports had claimed that Swaraj had met the ex-IPL chief in the British capital in October last year.
Sushma Swaraj and Vasundhara Raje are facing serious allegations, PM must come out and take actions against them – PL Punia
Helping a person (Lalit Modi) who has serious charges against him, is a very serious matter, says Congress leader PL Punia.
She (Raje) said, not only she is going to help Lalit Modi but gave in writing that help extended must not be disclosed to any Indian investigating agency. This means she knew she is breaking the law. BJP must come clean on this, PM must break his silence – Sachin Pilot
A person (Lalit Modi) who created black money, indulged in illegal activities, is being helped by Rajasthan CM. This needs clarification from her, says Congress leader Sachin Pilot.}
Time will tell what decision PM Narendra Modi and his government will take on the matter – Ashok Gehlot
What should I say about Vasundhara Raje and Lalit Modi? The entire state and its people known about them, says former Rajasthan chief minister and Congress leader Ashok Gehlot.Lalit Modi admits closeness to Sushma, Vasundhara
Amid the row over his travel documents, former IPL chief Lalit Modi on Tuesday admitted close relations with Rajasthan Chief Minister Vasundhara Raje and External Affairs Minister Sushma Swaraj, and said he has been “over criticised” and “taken to task” by the former UPA government.
“At the end I have done nothing wrong. I’ve gone by book… I have been over criticised, have been taken to task by the (UPA) government for no reason for all,” he said in an interview to a news channel.
“The entire UPA government was against me,” he said, as reported by News Agency IANS. Modi added that former finance minister P Chidambaram tried to deport him to India.
He challenged the Enforcement Directorate (ED) to prove charges against him and said “Swarajs” have been his friends for over 20 years, and that Vasundhara Raje is a “family friend”.
Asked if he was cool about Swaraj possibly losing her job because of her support to him, he said: “I am not perfectly cool and calm about someone doing an honest losing their job. (Shashi) Tharoor lost job because he lied. He lied he had nothing to do with the Kochi team…”
He said he sought help from Swaraj and Raje so that he could be with his ailing wife, and admitted making call to Swaraj.
He said he could have given up his right as Indian citizen and taken another citizenship but he did not do so because he wanted to prove that his passport was taken wrongly.Modi also said Swaraj’s daughter Bansuri has been his lawyer for four years.”I am close to a lot of politicians,” he added.
“Sharad Pawar and Praful Patel also helped me with travel papers… Rajiv Shukla also helped me with travel documents,” he said.
Jaitley backs Sushma as Vasundhara’s name crops up
External Affairs Minister Sushma Swaraj on Tuesday got strong backing from her colleague, Finance Minister Arun Jaitley, who termed “baseless” all allegations against her in the Lalit Modi issue. The BJP’s Rajasthan Chief Minister Vasundhara Raje’s name also cropped up in the billowing controversy.The Congress has demanded a Supreme Court-monitored probe in the matter.

Appearing at a press conference, held ostensibly on the Jammu and Kashmir flood rehabilitation measures, Jaitley said to a query: “Let me clarify, all the allegations are baseless. The minister (Sushma Swaraj) and the party chief (Amit Shah) have given statements… she acted bona fide with good intentions. The whole government and party share the same view on this. There is no doubt on this.”

Jaitley’s statement came two days after the controversy broke out over Swaraj procuring travel documents for the former IPL chief who is charged with financial impropriety and who has been staying in Britain since 2010.
Jaitley’s defence came after three other BJP colleagues — Amit Shah, Home Minister Rajnath Singh and Environment Minister Prakash Javadekar — spoke in Swaraj’s support.”Our ministers are capable of taking decisions, and all decisions taken by the government are the collective responsibility of the government,” Jaitley said.
There was speculation as to why Jaitley, who also holds the information and broadcasting portfolio, had not spoken out in favour of his colleague.Social media has been rife with speculation that the leak to the media of the email exchanges between Swaraj, Lalit Modi and Indian-origin British MP Keith Vaz was the job of an “insider”, especially with Swaraj getting top rating for her good work as minister.
Also on Tuesday, the name of Vasundhara Raje cropped up in the controversy, adding a new twist, with allegations that she testified in favour of Modi’s British immigration application in 2011.
The revelation apparently was made in a document released by Lalit Modi’s legal team where it is mentioned that Raje, who was then leader of opposition in the Rajasthan Assembly, said she was in favour of Modi’s immigration application on the strict clause that her name will not be revealed to the Indian authorities. The authenticity of the document has not been proved.
Raje, in a press note issued by her media advisor, later said: “I know the family of Lalit Modi. But I am not aware which document people are talking about.”
Sushma Swaraj has admitted she helped Modi procure documents to travel to Portugal last year for treatment of his cancer-stricken wife on “humanitarian grounds”.The episode has caused huge embarrassment to the government as Lalit Modi is wanted by the Enforcement Directorate for alleged financial bungling in the money-spinning IPL.
He has been living in London since 2010 after the ED issued a (light) blue corner notice against him for probe in the matter.During the press conference, Jaitley to questions on the Enforcement Directorate notice to Lalit Modi said the former IPL chief has been issued show cause notice in 15 out of the 16 cases and “in one case the investigation is still pending”.
He said a blue corner notice served against Modi by the Directorate of Revenue Intelligence at the request of the ED in 2010, “continues to be valid”.