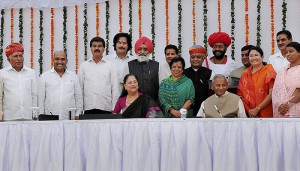 JAIPUR:  In her first cabinet expansion ten months after assuming office, Chief Minister Vasundhara Raje on Monday inducted 14 members into her council of ministers, raising the size of her ministry to 26.
Of the 14 new ministers, four were given cabinet rank, six were sworn in as Minister of State with Independent charge, and four others as Minister of State.Eight of them were already ministers in Raje’s previous term during 2003-08.
Those sworn in as Cabinet Ministers are Rajpal Singh (MLA from Jhotwara), Kiran Maheshwari (Rajsamand), Surendra Goyal (Jaitaran) and Rampratap (Hanumangarh).
Amra Ram (Pachpadra), Krishnendra Kaur (Nadbai), Vasudev Devnani (Ajmer North), Rajkumar Rinwa, Surendra Pal Singh (Karanpur) and Anita Bhadel (Ajmer South) were sworn in as Ministers of State (all with Independent portfolio).
Those who were sworn in as Minister of State are Pushpendra Singh (Bali), Baboo Lal Verma (Keshoraipatan), Arjunlal, Otaram Dewasi (Sirohi).
Devnani took oath in Sanskrit and others in Hindi.
The new ministers were administered the oath by Governor Kalyan Singh at Raj Bhawan.Responding to a volley of questions, Raje said, “Now a good team is constituted and they (ministers) will do public welfare works”.She turn towards RSS leaders Rajendra Bhai, Durgadas and Moolchand sitting as VIP guests, and asked them “Ab aap log santusht to ho na (Are you satisfied now)?”
In response, they smiled with folded hands.
With today’s expansion, Raje cabinet now constitutes 13 cabinet ministers, nine minister of states with Independent portfolios, and four MOS.Raje was sworn-in as Chief Minister on December 13, 2013 after a landslide victory for BJP which bagged 163 seats in the 200-member house.Raje?had inducted 12 ministers on December 20.
BJP, however, lost three seats to Congress in the recent Assembly bypolls and its tally fell to 160.After losing Nasirabad, Weir and Surajgarh in the bye-elections, Raje had to face ire of party MLAs and central leaders.