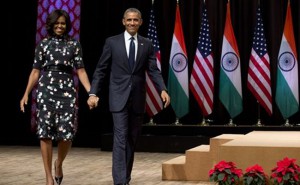 NEW DELHI :  US President Barack Obama made a strong appeal for religious freedom at a town hall-style meeting in Delhi on Tuesday, weighing in on one of India’s most controversial topics as he wound up a three-day visit.
“India will succeed as long as it’s not splintered along religious lines…nowhere is it more important to uphold religious freedom than in India,” President Obama said while addressing 2,000 young people at the Siri Fort auditorium.
“Your Article 25 (of the Constitution) says that all people are ‘equally entitled to freedom of conscience and the right freely to profess, practice and propagate religion,” President Obama said, adding, “In both our countries, in all countries, upholding this fundamental freedom is the responsibility of government, but it’s also the responsibility of every person.”
The US President’s remarks are significant at a time Prime Minister Narendra Modi’s government has been accused by rival political parties of not checking pro-Hindu activists and groups seen to have been emboldened by the BJP’s rise to power in May last year.
PM Modi had last year warned lawmakers from his party against making provocative statements seen to divert attention from his government’s agenda of economic reforms.
President Obama in his speech referenced his own experience as a minority in America.
“There were moments in my life where I’ve been treated differently because of the colour of my skin…There have been times where my faith has at times been questioned by people who don’t know me, or they’ve said that I adhere to a different religion, as if that were somehow a bad thing,” he said, noting persistent rumours that he is a Muslim, not a Christian.
“Every person has the right to practice their religion and beliefs and not practice it if they choose so without any persecution,” he added.
US President Barack Obama speaks at a town hall event at Siri Fort Auditorium.
During his visit, President Obama bonded warmly with PM Modi, who was banned for nearly a decade from visiting the US after the 2002 riots in Gujarat, the state he ruled for 13 years till he took over as Prime Minister last year.
The US President’s 40-minute speech today had more than one Hindi phrase. His audience cheered in delight when he borrowed a Shah Rukh Khan dialogue from the blockbuster film Dilwale Dulhaniya Le Jayenge – “Senorita…bade bade deshon mein…you know what I mean.”
Mr Obama, the first US president to be chief guest at India’s Republic Day parade, described the relationship between India and the US as potentially “one of the defining partnerships of the century”.