NEW DELHI : At a time when corruption is dominating the ongoing electoral process in the country, which is witnessing a kind of voter revolt against the ruling Congress party, an explosive report on the rise of Robert Vadra, the son-in-law of UPA chairperson Sonia Gandhi, is further likely to dampen the spirit of the voters and add to their resentment. 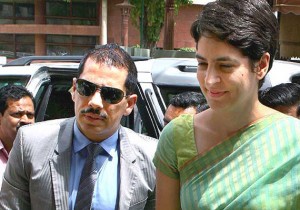 A report published by the “Wall Street Journal” focuses on Robert Vadra’s journey from a lesser known individual to a member of the all-powerful Nehru-Gandhi family, which has ruled the country for nearly 60 years, to becoming a real estate tycoon. The WSJ in its report states how Vadra bought large tracts of arid agricultural land in a small town ‘Kolayat’ in western Rajasthan in 2009 and other parts of the country.
The WSJ report further claims that shortly after Vadra began purchasing large tracts of lands, the Congress government at the Centre announced plans to promote large-scale solar energy production, a land-intensive project for which the area was well-suited. Vadra continued buying the land, and in 2011 the government, too, announced solar incentives. During this time, the value of land purchased by Sonia Gandhi’s son-in-law increased six-fold within three years, as per the state record of land transactions, the WSJ report claims.
Though several cases of alleged wrongdoings were filed against Vadra to ascertain whether there were any legal violations, no legal authority ever accused him of any misconduct. Tracing the early life of Vadra, the WSJ reported that the 44-year-old son-in-law of Sonia Gandhi, with a high-school education and no formal experience in the real estate sector, amassed huge wealth during the decade after Congress came to power in 2004.
“Based on a review of company filings, land records and interviews with property experts, the Journal calculated that through 2012, Mr Vadra sold more than $12 million of property, and as of then he still held real estate valued at about $42 million. It isn’t clear whether Mr Vadra’s companies have sold any more real estate since then because company filings for the past two years aren’t available on government websites,” the WSJ report said.
The WSJ report further states that Vadra used to run a small business – exporting inexpensive costume jewellery – when Congress led by Sonia Gandhi came to power in 2004. Vadra ventured into the real estate business in 2007 and formed a firm called Sky Light Hospitality Private Ltd with less than $2,000, according to company filings at the Registrar of Companies of the Ministry of Corporate Affairs in New Delhi.
“Early in 2008, Sky Light bought 3.5 acres of undeveloped land near a highway intersection in the New Delhi suburb of Gurgaon for $1.3 million, according to a sales document. Two months later, Mr. Vadra applied to the Congress-controlled state government for a license to convert the land to commercial use from agricultural. Preliminary permission was granted 18 days later, according to the license application and state approval. With that, the land became far more valuable,” the WSJ reported.
“Over the next four years, developer DLF Ltd poured millions of dollars into Mr Vadra’s company, reported on its balance sheet as ‘advances’. Then in 2012, DLF said it bought the Gurgaon property from Mr Vadra’s company for a total of $9.7 million, most of which it had advanced in the preceding years. It was more than seven times his reported purchase price,” the WSJ report said.
However, Vadra’s land deals with real estate giant DLF made headlines when a senior official at the Haryana state land office, Ashok Khemka, looked into the deal and concluded that his company “did not own the resources to pay” for the land when purchasing it in 2008.

Suspecting irregularities, Khemka went ahead and cancelled the deal.
Haryana’s Chief Minister, a Congress politician, punished Khemka by transferring him to a position in a state-run agricultural company. Khemka, a whistleblower in a number of past allegations of corruption, then alleged that he has been transferred numerous times in his 22-year civil-service career to foil his gadfly efforts.
The WSJ report further states, “According to government filings, Sky Light Hospitality said it paid for the land in 2008 with a loan from state-owned Corporation Bank. In 2012, the bank’s then-chairman was quoted as saying to media that there ‘was no such transaction with us as per our records so far’. That official has left the bank and couldn’t be reached; the new bank chairman has refused to comment.”
In a report to the state last year, Khemka wrote that the 2008 sale of the land to Vadra’s company “was a completely sham transaction.” The state-appointed investigative panel looked at the deal and concluded Vadra did nothing wrong.
“Mr Vadra’s Sky Light Hospitality did other deals in New Delhi and the nearby states of Haryana and Rajasthan. In 2008-09, it paid $5.3 million for a 50% interest in a hotel being built by DLF in New Delhi, a hotel valued at $33 million in 2012, according to a DLF calculation that year,” the report said.
Another company controlled by Mr Vadra, Sky Light Realty, acquired a penthouse apartment—estimated by brokers to now be worth $5 million—in a complex DLF built in Gurgaon called the Aralias. That same Vadra company reported in its government filings for fiscal 2009 and 2010 that it bought seven apartments in a luxury complex built by DLF for $870,000.
They were worth close to $6 million at the time, real estate brokers said. The AAP party led by Arvind Kejriwal also made serious allegations against Vadra over his land dealings. The WSJ reported that Vadra purchased most of the land in Rajasthan in 2009 when Congress ruled the state.
According to WSJ, from 2009 to 2012, Vadra’s companies bought about 2,000 acres in Rajasthan for about $1 million, as per the records compiled by the Kolayat land office in Rajasthan state. In one purchase registered in the land-office books, Vadra bought 94 acres for $70,000 in January of 2010, it said.

Another interesting aspect of Vadra’s business dealings is that he was represented locally by Mahesh Nagar, who has also represented Rahul Gandhi on at least one occasion. Nagar, who is the brother of a Congress party politician, claims that he didn’t personally know either Vadra or Rahul Gandhi, and after further investigation, claimed that he had been approached by a “facilitator” who gave him authority letters to get lands registered for Messrs Vadra and Gandhi.

Nagar, according to real estate brokers and local land officials, actually handed out money for land sellers from inside a black SUV when Vadra began acquiring property in Rajasthan. Brokers took turns entering the vehicle, receiving payment for property sellers from Nagar, and signing documents that local land officials registered within hours, the report claims.
Though Nagar admits that he handled land purchases and sales for Vadra for several years, he categorically denies using a black SUV for cracking land deals.
With BJP now back in power in Rajasthan, it has directed the land office in Kolayat to pull together records of all transactions in the area involving Vadra.
However, Vadra’s spokesman has refuted all allegations of wrongdoings by Sonia Gandhi’s son-in-law and claimed that he has been subjected to a campaign to malign him for political reasons. “He has acquired and disposed of real estate in exercise of his rights and has obtained no favor or benefit from anyone,” the spokesman said. “He has complied with all applicable provisions of law and has nothing further to say.”