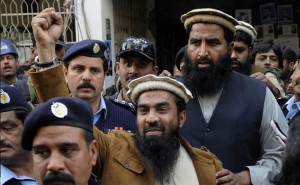 WASHINGTON: Expressing grave concern over Mumbai attack mastermind Zakir-ur-Rehman Lakhvi’s release, the US today said it has repeatedly asked Pakistan to follow through on its commitment to ensure justice for the 26/11 victims.
“We are gravely concerned about the release on bail of alleged Mumbai attack mastermind Zakir-ur-Rehman Lakhvi,” State Department Acting Spokesperson Jeff Rathke told reporters at his daily news conference.
“We have communicated that concern to senior Pakistani officials over the course of many months, and as recently as yesterday,” he said when asked about the release of Lakhvi by Pakistan.”Terrorist attacks are an assault on the collective safety and security of all countries. Pakistan has pledged its cooperation in bringing the perpetrators, financiers, and sponsors of the Mumbai terrorist attacks to justice, and we urge Pakistan to follow through on that commitment to ensure justice for the 166 innocent people, including six Americans, who lost their lives,” he said.
Responding to questions, Rathke refused to comment on the
“consequences or repercussions” for Pakistan for not following through its commitment as reflected in the release of Lakhvi.
“We are gravely concerned about this development,” he said.

“I’m not going to put a time line on it (bringing perpetrators to justice). But certainly bringing the perpetrators of the Mumbai terrorist attacks to justice is a key priority, and we stand by that. So, we’ll continue working in that direction, but I don’t have any further specific steps to outline right now,” Rathke said.
Fifty five-year-old Lakhvi, who guided 10 LeT gunmen from a control room in Pakistan during 26/11, walked free today after being under detention for six years, a day after a Pakistani court ordered his release.
Lakhvi, a close relative of LeT founder and JuD chief Hafiz Saeed, was arrested in December 2008 and was indicted along with the six others on November 25, 2009, in connection with the 26/11 attack that claimed 166 lives. The trial has been underway since 2009.