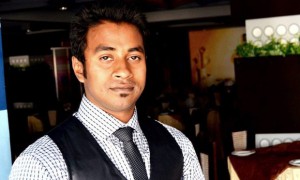 .Nazimuddin Samad, 28, a masters student of the state-run Jagannath University’s law department who posted comments against radical Islamists on Facebook, was killed by suspected militants in Dhaka’s Sutrapur area last night.
“We offer our condolences to Mr Nazimuddin Samad’s family and our unwavering support to the Bangladeshi people in their struggle against violent extremism,” State Department Deputy Spokesman Mark Toner said.
“Nazimuddin knew and Bangladesh’s history has shown that violence will not defeat the country’s proud tradition of free and independent discourse. So we stand with the Bangladeshi people in rejecting this vicious act, and uniting to preserve a tolerant and inclusive society that protects freedom of expression,” Toner said.”
The United States will continue to support the government of Bangladesh in its efforts to combat terrorism, counter violent extremism, and bring to justice those who commit such heinous acts,” Toner said.Samad was hacked to death by machete-wielding militants.
He is the latest victim in a series of attacks on secular bloggers and activists in the Muslim-majority country. He was attacked by three assailants while walking to his home in Gendaria with another youth after completing classes at the university near Bahadur Shah Park.
While murdering Samad, the killers shouted Allahu Akbar (God is Greatest), witnesses said. The youth accompanying the victim has been missing since the incident, a police official said.
“They initially hacked him and then fired gunshots to confirm his death,” the official said. Nazim, who hailed from Sylhet, was the information and research secretary of Sylhet district unit of Bangabandhu Jatiya Jubo Parishad. He was also an activist of Gonojagoron Moncho’s Sylhet wing.
His friends said Nazim used to campaign for secularism on Facebook and was critical of radical Islamists. A day before the murder, he expressed concerns over the country’s law and order in a Facebook post.