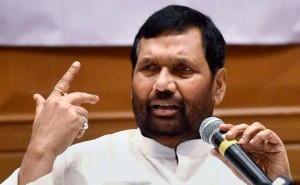 PATNA: Union Minister and Lok Jan Shakti Party president Ram Vilas Paswan today came to the defence of Prime Minister Narendra Modi and BJP chief Amit Shah in the wake of NDA debacle in Bihar.
“It’s not the defeat of National Democratic Alliance but defeat of public of Bihar,” Paswan told reporters.When asked if NDA drubbing in Bihar was a defeat of the Prime Minister on whose face the ruling coalition had gone to polls, Mr Paswan disagreed and thanked PM Modi and Mr Shah for successful campaigning in the state.
“PM would have been defeated if his election meetings had flopped. But we saw a huge gathering of people in his all election meetings,” the LJP chief said, adding, “We should be thankful to the PM for devoting so much time to Bihar to know about its problems.”

“NDA had contested elections not in the name of PM but in the name of development of Bihar,” he said.Mr Paswan also praised Mr Shah saying he worked hard to galvanise party workers by making surprise visits to district party headquarters to establish proper coordination between workers of constituent parties.
Mr Paswan had earlier said that opposition parties in Bihar were successful in convincing people that reservation will go and minorities won’t be safe if NDA came to power.
He said a comprehensive review meeting of LJP on recent Bihar elections would be held here on November 28 to analyse causes of defeat.LJP which had fought 41 seats as part of NDA coalition managed to win only two seats in the polls.