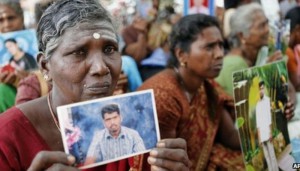 ITED NATIONS: Lifting the lid off several horrific crimes committed during years of Sri Lankan civil war, a new UN report has documented widespread use of torture, sexual violence, enforced disappearances and extra-judicial killings during the 26-year-war.
According to the report, tens of thousands disappeared during the civil war, noting that ‘enforced disappearnce’ was part of a systematic policy.
Speaking about the UN investigation into the Sri Lankan civil war, Zeid Ra’ad Al Hussein, High Commissioner for Human Rights, said that the new UN report “is opportunity to end discourses of denial & bring about change”.
He has urged the creation of hybrid special court in Sri Lanka as UN report confirms patterns of grave human right violations committed by both sides.
The UN report has also revealed that security forces used sexual violence as “deliberate means of torture to extract information and to humiliate and punish persons who were presumed to have some link to the LTTE.”
Rape and other forms of sexual violence by security forces personnel was widespread against both male and female detainees, particularly in the aftermath of the armed conflict, says the UN report.
“OISL documented brutal use of torture by the Sri Lankan security forces, particularly in the immediate aftermath of the armed conflict when former LTTE members and civilians were detained en masse,” says the report.
This followed similar patterns by a range of security forces in multiple facilities, including army camps, police stations and “rehabilitation camps”, as well as secret, unidentified locations.
The High Commissioner for Human Rights added that not a single perpetrator has been punished.
The High Commissioner for Human Rights has also called for dismantling of “many of the structures responsible for human rights abuses that still remain in place.The report comes as the United States prepares to co-sponsor a resolution at the UN Human Rights Council in Geneva seeking to improve accountability in Sri Lanka.

Rights groups and some governments want an international investigation, but Sri Lanka has resisted. The 26-year-long civil war ended in 2009 when Tamil Tiger rebels (LTTE) were defeated by the government forces.
At least 80,000 people are said to have been killed in the war, the UN estimates.