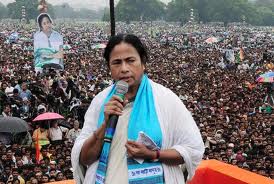 KOLKATA :  Rolling out strident attacks on the Congress, CPI(M) and BJP, Trinamool Congress leader and West Bengal Chief Minister Mamata Banerjee today kicked off party’s LS poll campaign from a massive Brigade Parade Ground rally this afternoon.
Asserting that her “party is only national alternative to Congress and BJP,’’ she attacked Congress where it would hurt the party most! “There’s no room for Rajtantra (an apparent reference to Congress’ dynastic rule and domination) and corruption in any democracy,’’ she said, hastening to add, “Nor we want the face of communalism (an apparent reference to Narendra Modi) at the Centre.’’
She dropped enough hints today that she would rather lead a Federal Front to replace Congress and BJP at the Centre after the election“But we need to talk it out with others (however, she did not elaborate which would be the parties, she would talk to).
She asked the Bengal voters to allow her party to win all 42 LS seats so that TMC emerges as the only alternative, would have more political powers to play a positive role in Delhi.
She also announced that she would put “LS candidates in Delhi, Punjab, Haryana, UP, Assam, Kerala, Tripura, so that we get more MPs to have a more powers in Delhi.’’
Though she did not name Modi, but her attacks on Congress was sharper and more determined: “They have sold out the nation to poverty, unemployment, price rise, discriminated us from other states and deprived Bengal from a bailout package from a debt-trapped situation created by CPI(M)-led Left Front, now party of rich men and erstwhile promoters of financial scams.’’
She attacked BJP, Congress and CPI(M) for having maintained silence on “recent cases of rapes of women in Muzzafarnagar.’’
“Why you criticize us but keep your lips tight on Muzzafarnagar? She satirically asked, pointing to media as well for criticizing her Government for its failure to reign in increasing rape cases in Bengal.
Rolling out attacks on CPI(M), she warned Bengal voters about the “land of darkness they created out of Bengal.’’
Tactically calculative, thinking she would take minority vote bank from Modi and Congress, she invited Imam of Tipu Sultan Masjid, Kolkata, who blessed her to become “nation’s saviour and become Prime Minister replacing Congress at the Centre.’’
Even Mahasweta Devi who at one point of time turned a bitter critic of Mamata Banerjee, today said: “I want to her to become Prime Minister as only suitable candidate for the post.’’
Political observers here believe that her sharp attacks on Congress and CPI(M) and to an extend on BJP may seal the fate of these parties in coming election.“However, we have our Brigade rally on 5th February and let’s see the Modi effect on Bengal voters,’’ reacted a state BJP leader.
“And we have it on 7 th February,’’ said a CPI(M) leader, adding, “we’ll see how Mamata effect can change our fate in election!’’But people in Kolkata will remain harassed as the traffic chaos the parties would let loose.