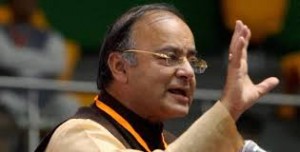 NEW DELHI : Indicating that his maiden budget next week will not indulge in ‘mindless populism’, Union Finance Minister Arun Jaitley on Tuesday said the government would take bold decisions and pursue path of fiscal prudence to revive economy.
Listing out the challenges before the country, he said fiscal deficit is high, inflation is beyond acceptable limits and the fallout of Iraq crisis looms large on the economy.“If you indulge in mindless populism you burden the exchequer…You convert yourself into a high taxation society. It does not work. Therefore if you have to follow a path of fiscal prudence, (you should) have a certain amount of discipline,” Jaitley said.
Addressing a function of the Institute of Chartered Accountants of India (ICAI), he said the rate of inflation compared to last year have somewhat come down but was “still beyond the acceptable limits.”Inflation rose to five-month high of 6.01 percent in May and there is likelihood of prices moving up further in view of predictions of below normal monsoon. Referring to investment scenario, Jaitley said that after three-four years of pessimism there is hope and now “bold decision-making” is possible.
He further said: “You have a loss of credibility in the Indian economy. The fact that the world suspects we don’t have a stable tax regime itself has dissuaded investors. ”Just as policy paralysis was unknown to our governance vocabulary, the other new addition which I have been reading comments from independent observers…Is tax terrorism.”
Observing that India fell off the global agenda, he said, now an interest in the country has suddenly emerged. “The responsibility now lies on us to respond to this new opportunity that has come before us,” he added. Jaitley said India is passing through a difficult situation of high fiscal deficit, inflation coupled with two years of sub-five percent growth and only “ill informed” opinion will support support.
“…It (populism) will be a one-way pat in the back by an ill-informed opinion and perhaps a long-term journey…We will walk into peril. That is a trap that will be difficult to get out of…,” the Minister added. Talking about fears of deficit monsoon and Iraq crisis, Jaitley said though these are challenges, they could be overcome.
“We have huge amount of food, we have no scarcity and we are in a position to manage it. I think if we decide to go on that path, growth rates are going to pick up,” he added. He also said foreign investment should be allowed where it is needed.Talking about ease of doing business, Jaitley said cumbersome process or very oppressive legislations can also scare away investors.
“I am willing to look at legislations because as new government we have the liberty to write fresh…At the same time, I think its a national opportunity for us to thoroughly debate all this… ”At times (when) tough and not so popular decisions come, you should realise that there is a case where the country has to be put back on the rails. Therefore the economy of the country, which was going on great tracks once,” he added.
While stressing on a reasonable taxation system, the Minister said businesses should understand that free trade also means fair trade.In order to improve economic activity and investment, Jaitley said: “Your infrastructure should be supportive, your decision making has to be quicker, your taxation regime has to be reasonable and the prospect of profitability has to be there”.
Making a case of tough and not so popular decisions, the minister said there is need to put the economy back on rails to achieve higher growth rate of 8-9 percent, a task which currently appears “daunting” as the “legacy I have inherited is not a cause for envy”.
He further said the “advantage we have is the relative ease in decision making…And if we are able to kick start the economy back then hopefully this ease in decision making may become the ease of doing business in India.“I hope at the end of five years we will be happier than when we started,” the Minister said. India’s fiscal deficit in the first two months of the fiscal has already touched about 45 percent of the budget estimate.