GUWAHATI:  The Sanmilito Jonogosthiyo Oikyo Moncho — an umbrella body of non-Bodo organisations — today threatened to cut off the lifelines to the Northeast for an indefinite period if the killing of innocent persons does not stop in the Bodoland Territorial Areas District immediately.Addressing a news conference here this afternoon, spokesperson for the organisation, Jamsher Ali, said if one more innocent person is killed in the BTAD, they will launch indefinite economic blockades at Srirampur and Baxirhat from May 5, cutting off the region from the rest of the country. 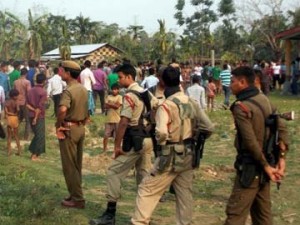 Reacting to the latest killings in the BTAD, KMSS leader Akhil Gogoi sought deployment of the army and demanded resignation of chief minister Tarun Gogoi and BTC chief Hagrama Mohilary for their “failure” to maintain law and order.The organisation blamed the “inaction” of the government and administrative machinery for the latest spurt of violence in the BTAD.The organisation-backed Independent candidate for Kokrajhar seat, Naba Kumar Sarania, demanded a CBI probe to identify those involved in the killings.
“The government has failed in its basic constitutional duty of providing security to the life and property of the people,” Ali said.He claimed that criminals armed with sophisticated weapons like AK-47 and AK-56 rifles are openly roaming around in the BTAD.According to him, vested interests are conspiring to foment communal trouble in the BTAD and the latest killings were a part of it.It also sought a high-level probe into the possible role of the Bodoland Peoples’ Front (BPF) in the killings.
“On Wednesday, BPF leader Pramila Rani Brahma commented that a particular community hadn’t voted for the BPF candidate in the Lok Sabha polls and a day after the killings started. Therefore, we want an inquiry to find out whether there is any connection between Brahma’s comments and the killings,” Ali said.He said the killings followed a BPF meeting held yesterday to analyse voting in the Kokrajhar constituency in the general elections.“The killings might have been carried out by militants but we suspect that some forces had instigated them,” he said.
Ali said the people are agitated in the violence-affected areas but are maintaining restraint.“But their patience is not unlimited and if the killings do not stop, the situation might take a dangerous turn,” he warned.
The president of the organisation, Hitesh Barman, said along with the NDFB’s Songbijit faction, there are many other armed groups in the BTAD and demanded seizure of all illegal arms to restore peace in the trouble-torn areas. “Even today we are receiving reports of torching of houses in Baksa district and firing in Kokrajhar district,” Barman said.He also expressed apprehension that by creating such a volatile situation, the BPF may try to tamper with the EVMs stored in the strong rooms.
Barman demanded that the security at the strong rooms under Kokrajhar constituency should be strengthened.
The KMSS today took out a procession from Cotton College to the Kamrup (metro) deputy commissioner’s office today and submitted a memorandum to governor J.B. Patnaik through the district administration, demanding the seizure of illegal arms and ensuring the security of life and property of the people.KMSS leader Akhil Gogoi also appealed to all the communities to maintain harmony.Coming down heavily on chief minister Tarun Gogoi, Akhil said there had been a series of ethnic clashes during Gogoi’s tenure and his divide-and-rule policy was responsible for it.
The KMSS leader said director-general of police Khagen Sarma should “rush to the BTAD instead of giving statements in Guwahati”.The CPI (M-L) also today issued a statement holding the Congress-led state government responsible for the deaths and demanded stern action against those involved in the killings.