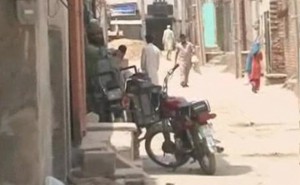 FAISLABAD: Mohammad Yakub and two of his sons live in a house at the end of street number 3, Rafique Colony, in Pakistan’s Faisalabad, confirm neighbours. His third son is Mohammad Naved, they say.
Mohammad Naved is the Pakistani terrorist caught on Wednesday after he attacked a Border Security Force or BSF bus in Udhampur in Jammu and Kashmir.
His home – the terrorist told his interrogators where he lives – is deep inside Ghulam Mohammadabad in the old part of Faislabad. His family is nowhere to be seen and the street is very silent, people watchful.”Why are you here? What are you doing with that?” asks a resident on seeing the camera.
Islamabad has denied that Naved is a Pakistani citizen. But Mohammad Yakub said in an interview to newspaper Hindustan Times that he is the “unfortunate father” of the terrorist captured in India on Wednesday.
“I’ll be killed, Lashkar and the Pakistani army are after us,” the father was quoted by the newspaper as saying on the phone.Naved, 22, has told investigators that he was trained at a Lashkar-e-Taiba camp in Pakistan before he entered India 45 days ago.
He said he has two brothers and a sister. One of the brothers, he said, is a lecturer while the other runs a hosiery business. Neighbours in Faislabad confirmed that.
Naved was captured after he attacked a BSF convoy along with another terrorist, who was shot dead. He escaped into a village and took three men hostage, but they later over-powered him and handed him over to the police.
“We have said many a times that making immediate accusations on Pakistan is not correct. These things should be based on facts. We expect that whenever Pakistan is being accused of something, it will be accompanied with correct evidence,” Pakistan Foreign Office Spokesperson Syed Qazi Khalilullah said about the terrorist on Thursday.