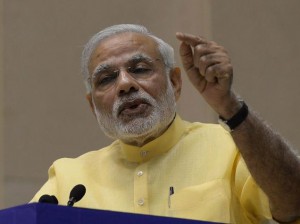 JAMMU: Prime Minister Narendra Modi on Friday disapproved of untouchability in politics, saying, “We should be proud and have equal regard for anybody who has worked and died for the nation, irrespective of their political ideologies and affiliations.”

Mr. Modi, who was in Jammu to commemorate the birth centenary of Girdhari Lal Dogra, hailed him for the selfless contribution to the society without indulging in nepotism.
He noted that Dogra was Jammu and Kashmir’s tall leader who had presented 26 budgets as Finance Minister of the State but never did any favours for his family members, including his son-in-law Arun Jaitley, now the union Finance Minister.
“Both (Dogra and Jaitley) took their own routes in public life. But today, we know what kind of talk is going on because of son-in-laws,” he said, in an apparent reference of Sonia Gandhi’s son-in-law Robert Vadra who is embroiled in controversies related to land deals.
The event was attended by Mr. Jaitley, Jammu and Kashmir Governor N.N Vohra, Chief Minister Mufti Sayeed, Leader of Opposition in Rajya Sabha Ghulam Nabi and senior Congress leader Karan Singh.
“Today in politics, there is a need to ensure that our heritage is not divided. This is a matter of concern,” he said, amid a tussle among political parties to claim the legacy of various national leaders.
Mr. Modi said public life cannot run by judging a person on the basis of his political party, ideology or leadership.