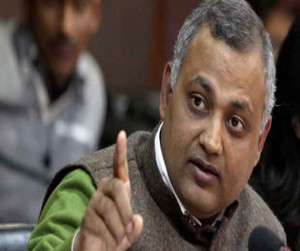 NEW DELHI: Aam Aadmi Party (AAP) MLA Somnath Bharti on Wednesday rubbished the domestic violence case filed against him by his wife Lipika Mitra, saying he has audio and documentary evidence that would reveal the actual truth.
“The allegation of attempt to murder has been put on me by the lady, who says `sweet heart when you will come home, I will take care of you` in an SMS. This SMS was sent to me by her (Lipika Mitra) on February 25, 2015. Can you imagine a wife calling her husband in such a way who is trying to murder her?” asked Bharti.

“I have audio and documentary evidence which will bring out the truth and prove that all the allegations against me are false,” he added.Bharti further said that he was not hiding and was only attempting to save himself from the Delhi Police that was acting on the orders of the Centre.
“The police, interrogating my legal clients and supporters, have even admitted that they have come on the orders of the Union Home Ministry. I even heard that the ATS (Anti-Terrorist Squad) came looking for me. Do you think I am a terrorist? ” Bharti added.
The AAP MLA has been served with a non-bailable warrant for domestic violence and an attempt to murder by his wife.