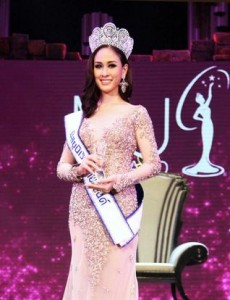 BANGKOK: Miss Universe Thailand has resigned less than a month into her reign after being harshly criticized on social media over her political comments and looks.Weluree Ditsayabut (22) tearfully announced she was giving up the title that would have allowed her to compete in the international Miss Universe pageant.
The actress and former talk show host said on Monday she was initially pleased to have won the title, but that the hail of brutal comments on social media blasting her outspoken political views and calling her fat had hurt her family.
Ms. Weluree was criticized for comments she posted on Facebook attacking the “Red Shirt” supporters of the former government, whom she accused of opposing Thailand’s monarchy, and calling for the execution of their leaders.“You Red Shirts, you get out of here,” she wrote in mid-November, before winning her title. “Thailand’s soil is dirty because of anti-monarchy people like you.Ms. Weluree said that because of the criticism, “the happiness we used to have disappeared totally.”
“When I saw my mom not being able to sleep at night, I couldn’t either,” she told a news conference. She didn’t specify which remarks she found most hurtful.Ms. Weluree’s comments struck at the heart of Thailand’s long-running political crisis, expressing the attitude of the country’s educated elite and royalists toward the government of then-Prime Minister Yingluck Shinawatra.
Ms. Yingluck, who was backed by many in Thailand’s rural north and northeast, was forced to step down last month, and the military soon afterward staged a coup against the elected civilian government.Thai society has been sharply polarized since 2006, when Ms. Yingluck’s brother, then-Prime Minister Thaksin Shinawatra, was ousted in a coup and subsequently fled into exile to avoid a corruption conviction. Since then until the recent coup, Mr. Thaksin’s opponents and the Red Shirts staged competing protests in an ongoing battle for political power.