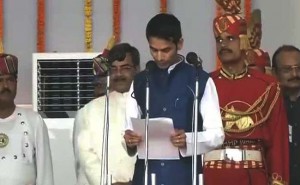 PATNA: Tej Pratap Yadav, the politically inexperienced older son of Lalu Yadav, was third in line to be sworn in today as a minister in Bihar’s Nitish Kumar government.
He was asked by Governor Ramnath Kovind to repeat his oath after a flub; he had said “Upekshit (neglected)” instead of “Apekshit (expectations)”. Even in his second attempt, he fumbled on another word.
Tej Pratap, who turns 28 tomorrow, has settled for a junior role compared to his younger brother Tejaswi, who is set to take charge as Deputy Chief Minister at 26.
Though both sons of Lalu Yadav are debutants and won their first election this time, Tejaswi is widely seen as his father’s political heir since he campaigned with him for last year’s national election.

Lalu’s oldest Misa contested the Lok Sabha election but lost. She was present at the swearing in ceremony along with two more sisters.Misa, Tej Pratap and Tejaswi are the only ones among Lalu’s nine children to join politics.