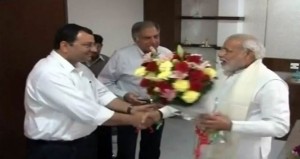 NEW DELHI: Tata Group Chairman Cyrus Mistry on Friday met Prime Minister Narendra Modi, whose government is working to reboot the economy.The meeting was a courtesy call by Mistry, according to sources. The Modi government, which was sworn in on 26 May, has identified as “paramount” the need to put the Indian economy back on track.
Tata Group Chairman Emeritus Ratan Tata and his successor at the salt-to-software group Mistry, who had been invited to the swearing in, were unable to attend as they were travelling abroad.