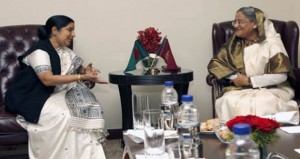 NEW DELHI: In her first stand-alone official visit abroad as External Affairs Minister, Sushma Swaraj will head to Bangladesh today. Swaraj will hold talks with top leadership there on key bilateral issues including Land Boundary Agreement and proposed Teesta river pact.
Though there are no pacts to be signed and no big outcome expectations, the trip, which is termed as a “goodwill” visit is aimed at taking forward the bilateral ties which are on a “positive trajectory” for past few years. The Indian side maintains they were not going with the “shopping list” and that the minister will review the status of bilateral ties and what to expect in the coming years.
However, the Indian delegation, which is expected to raise issues like illegal immigration and market access, is also prepared that Bangladesh will raise the “touche” issues of LBA and proposed Teesta river pact.
Significantly, it was BJP’s opposition, coupled with that of Trinamool Congress and Asom Gana Parishad which prevented the previous Congress from formalising the land boundary agreement and signing the Teesta water sharing deal with Bangladesh.
The LBA, which is yet to be approved by Parliament, is aimed at redrawing the international boundary between India and Bangladesh by exchanging areas of adverse possession and enclaves along with population on either side, thus making the highly incongruous and porous Indo-Bangla border more manageable.
Meanwhile, the Spokesperson in the MEA said there was no proposal of visa-free travel for any Bangladesh national on the table. He was asked about the reports that Home Ministry has shot down the MEA proposals on visa-free travel to certain category of travellers. MEA also said Swaraj’s visit, at the invitation of her Bangladeshi counterpart Abul Hassan Mahmood Ali, reflects the importance that India attaches to its bilateral relationship with Bangladesh, a close friend and neighbour.
During the visit, the minister will hold discussions on bilateral issues with Ali and also call on President of Bangladesh, Abdul Hamid, and Prime Minister, Sheikh Hasina.
She will also have engagement with think tanks, chambers of commerce and industry and cultural organisations.