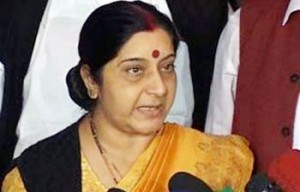 NEW DELHI: Confident of the numbers to clear it, the Narendra Modi government assured the Lok Sabha on Wednesday that it will bring the long-pending legislation on 33% reservation for women in Parliament in the present regime and urged all the other parties to support it.
Speaking on the motion of thanks to the presidential address on Wednesday, external affairs minister Sushma Swaraj told the Lok Sabha that one of the unique features of the Narendra Modi government is the manner in which it has empowered women. Giving instances she said, 25% (that is 6) of the 23 members in the Cabinet are women, a woman has replaced Modi as chief minister (Anandiben Patel) in Gujarat and the first woman Speaker in Lok Sabha (Meira Kumar in the UPA-II regime) has also been replaced by a senior woman MP (Sumita Mahajan).
Therefore, Swaraj told the House that, the government will bring the women’s reservation bill soon and was confident of passing this “milestone legislation.” She addressed the Congress leadership in the Opposition benches and said, “when you brought the women’s reservation bill we supported it, hence when we bring it in the 16th Lok Sabha you (Congress) should support it. She also urged all the other parties to support the bill.
Swaraj also took on the government for calling the BJP’s campaign a “marketing gimmick,” referring to leader of Congress party in Lok Sabha, Mallikarjun Kharge’s remark on Tuesday, as he spoke on the presidential address. But the deft parliamentarian Swaraj, turned the phrase around intelligently to use it against Congress which has lost the elections and were sitting in the Opposition benches with a highly depleted strength.
She said Congress lost badly in the polls due to non-performance and because its “product” was not marketable, while BJP succeeded as its product was good and became a hit with the people. “Let us be clear that the product should be good. If it is not, then marketing will make no impact. Our product was liked by the people because of its quality,” Swaraj said.
“You also did tried to market your products. But there was anger against your government… people accepted Narendra Modi as an alternative and the candidates (of the ruling alliance) became secondary and people cutting across caste and creed voted for Modi,” she added.
Kharge who had said on Tuesday that BJP is good at marketing and propaganda, suggesting that it was the reason for its success in the electoral battle in which Congress was led by Rahul Gandhi.Swaraj said after 1984, it is for the first time that a single party has received majority on its own. It had happened in 1980 when Congress got 300 seats and then in 1984 when it crossed the 400 mark.“People had thought that the era of single party majority has ended. But this time, it is unique as BJP has got 282 and NDA 336… when we talked of getting 272 plus on our own, people laughed,” she said.