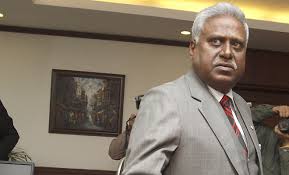 NEW DEDELHI : The Supreme Court has asked the CBI Director Ranjit Sinha to explain his meetings with the corporates. The apex court has also asked Sinha to file a counter-affidavit on the allegations against him.The Supreme Court bench further told Sinha to tell everything in black and white.
The Court today said it could cancel all decisions taken by the CBI chief in the agency’s investigation into the coal scandal, if it is proven that he tried to prevent a fair inquiry. The charges against CBI director Ranjit Sinha have been levelled by lawyer-activist Prashant Bhushan, who is also a senior leader of the Aam Aadmi Party or AAP. Related Home Ministry Asks States to Fast-Track Cases Against Lawmakers Stock Markets to Track Supreme Court Coal Hearing, Economic Data This Week In support of his claim, Mr Bhushan today submitted to judges what he described as the original record of visitors to Mr Sinha’s Delhi home in recent months.
Mr Bhushan had furnished a photocopy of the visitors’ diary in the top court last week; he says the original was delivered to his house last night by unidentified people who said they were worried the record would be destroyed. Entries in the diary that has been given to judges show Mr Sinha received house calls from an array of people being investigated by the CBI on serious criminal charges in the telecom and coal scams, described by the state auditor as among the most voluptuous in the country’s history.
Both are pivoted on crony capitalism deciding the allocation of coal and mobile network licenses in the absence of an auction. Mr Bhushan says the visits were inappropriate and signal that Mr Sinha was intent on trying to protect the accused who met him. The CBI director says those charges are baseless and that the scrutiny of the visitors’ diary amounts to an invasion of his privacy, an argument dismissed by the Supreme Court last week.

Mr Bhushan has said the top court should remove Mr Sinha from the coal investigation altogether; separately, he has written to the Prime Minister demanding that the CBI chief be sacked. The Supreme Court will next hear the case on Monday, September 15.